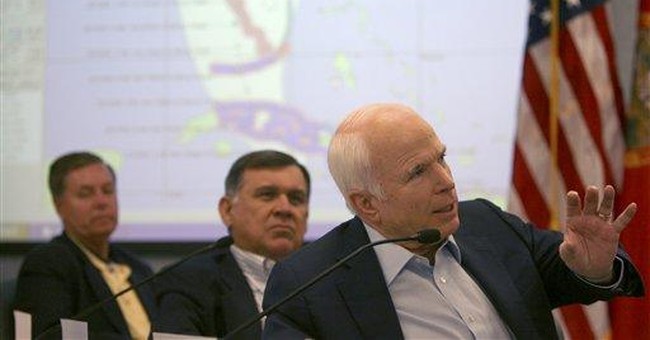 Leftist Hollywood actors seldom receive praise for their historical foresight and political acumen. But maybe they should.

Fresh off the heels of his widely-praised performance at the “Civil Forum” at Saddleback Church, Sen. John McCain appears determined to make a prediction by Robert Redford prove prescient come Election Day.

“I think Obama is not tall on experience,” Redford told the Irish Times last month, “but I believe he's a really good person…. I hope he'll win. I think he will. If he doesn't, you can kiss the Democratic Party goodbye.”

That’s not a misprint. Read it again.

If history teaches us anything it is that the national political parties rise and fall by the psychological political warfare each wages upon the other. With Democrats’ electoral expectations at an all-time high this presidential cycle, the fallout from a 2008 presidential defeat would widen the already expanding fissures in the Democratic Party’s base.

Consider the political fallout that might ensue for the Democratic Party’s voting coalition if Sen. McCain dashes Democratic hopes in an election year Sen. Obama is heavily favored to win.

Democratic women voters would come away disillusioned at the prospects of having missed the chance to run the first female presidential candidate—and never knowing what might have been. African American voters—9 out of 10 of whom vote Democrat—would be deeply disenchanted that the first black candidate for president lost amid the single-best political climate for Democrats since Watergate. The liberal elite that dominate America’s university campuses, some of Sen. Obama’s fiercest and most devoted supporters, would be faced to confront the realization that the Democratic Party would likely never again nominate a candidate of Sen. Obama’s Leftist bona fides. And as for what remains of Union households, 2008 will have been the year marking the personal implosion of one of their most vocal champions, Sen. John Edwards.

Indeed, if public opinion is any historical indicator, Democrat’s cause for concern may be worse than expected. In 1988, liberal Massachusetts Governor Michael Dukakis was heavily favored to beat then-Vice President George H.W. Bush. Following the Democratic Party Convention that year, Dukakis expanded his lead over Bush to a jaw-dropping 17-points, a figure hard to imagine Sen. Obama besting in three weeks coming out of his party’s Clinton-heavy convention line-up.

Similarly, in the two subsequent presidential elections where Democrats were defeated, both Senators Al Gore and John Kerry were ahead of the Republican candidate following their party’s conventions. Indeed, the current RealClearPolitics average of polls has Obama ahead by just 3.2%, a figure within the statistical margin of error.

Add to that the fact that the national mood appears to be growing increasingly optimistic. Last week Gallup reported a huge surge in consumer optimism over gas prices. In July, 87% of Americans believed gas prices in their local area would increase by the end of the year. Last week, that figure had plunged to just 40%. Similarly, consumer confidence about the nation’s economic outlook appears to be making a bit of a comeback, with numbers not this positive since February.

Americans are hardly ready to break out the champagne bottles. And indeed, Olympic fever and Michael Phelps’s historic gold medal performances might have just as much to do with greater optimism as anything else. But clearly American sentiments have begun to shift, and not in a direction favorable for Democrats.

Much can and will change in the weeks ahead. But the conventional wisdom that 2008 represents a golden opportunity for Democrats is exactly backwards.

The Sundance Kid had it right: a GOP presidential victory come November would leave the Democratic Party in shambles.