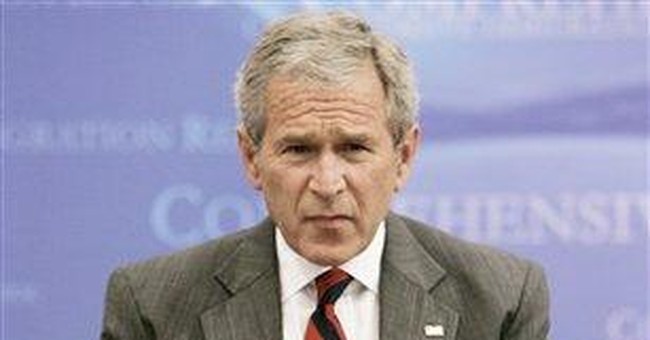 1. Who gave the first public statement to lay the foundation for American anticommunism, which is one of the pillars of the American conservative movement?

2. Which famous Yale University graduate said this in his epic commencement address: “Our concern for deficiencies in America must not cause us to indict the principles that have allowed our country, its faults notwithstanding, to tower over the nations of the world as a citadel of freedom and wealth.”

3. Who saved the Civil Rights Act of 1964 with a powerful speech, delivered minutes before the vote in the Senate?

4. One of the most remarkable lines in conservative movement history: “I would remind you that extremism in the defense of liberty is no vice. And let me remind you also that moderation in the pursuit of justice is no virtue.” Who said it?

a. Ronald Reagan, in his 1981 Inaugural Address

b. Barry Goldwater, in his acceptance speech at 1964 GOP Convention

d. Patrick Henry, speaking to the Virginia House of Burgesses

5. Who said, “Those who would trade our freedom for the soup kitchen of the welfare state have told us that they have a utopian solution of peace without victory … And they say if we only avoid any direct confrontation with the enemy, he will forget his evil ways and learn to love us. All who oppose them are indicted as warmongers.” And “You and I have a rendezvous with destiny. We will preserve for our children this, the last best hope of man on Earth, or we will sentence them to take the last step into a thousand years of darkness.”

7. Who said “Government is not the solution to our problem; government is the problem,” which essentiallyoutlined the modern conservative approach to free-market philosophy in a single sentence?

8. Who said, “While America’s military strength is important, let me add here that I’ve always maintained that the struggle now going on for the world will never be decided by bombs or rockets, by armies or military might. The real crisis we face today is a spiritual one; at root, it is a test of moral will and faith.”

9. Which visionary conservative launched a rhetorical attack against secularism in public school textbooks as early as 1987?

10. When she was selected as the commencement speaker at Wellesley College, 150 out of 600 graduating seniors protested, signing a petition that read, “[She] has gained recognition through the achievements of her husband … [Wellesley] teaches us that we will be rewarded on the basis of our own merit, not on thatof a spouse.” She decided to speak anyway, and defend her choice to be a full-time wife and mother to adecidedly hostile, feminist crowd. Who was she?

11. Which American conservative said this in his Acceptance Speech: “We must replace the welfare state with an opportunity society”?

12. Which speech not only needed to heal a nation, but established a new direction in American foreign policy?

a. George W. Bush’s post-9-11 televised speech to the nation

b. Ronald Reagan, in 1983 after the bombing of the Beirut barracks

c. Gerald Ford after the fall of Saigon in 1975

1.) Answer: B. Whittaker Chambers. Whittaker Chambers’s August 3, 1948, testimony before the House Committee on Un-American Activities included the public naming of U.S. governmental officials whom Chambers claimed had served as associates during his life as a Soviet subversive. The testimony transformed Chambers into a conservative icon.

2.) Answer: D. William F. Buckley. Buckley’s June 11, 1950, Class Day Oration at Yale University foreshadowed the blistering attack he would later unleash in his first and most famous book, God & Man at Yale. The book’s success encouraged him to then found the magazine, National Review, which is considered the gathering place for conservative thought.

3.) Answer: A. Everett Dirksen.Illinois Senator Everett Dirksen delivered his speech, “The Time Has Come,” on June 10, 1964, just minutes before the U.S. Senate was to vote to shut down Democrats’ filibuster attempt to torpedo the Civil Rights Act of 1964. Dirksen, who was then the Republican Minority Leader, challenged Republicans to live up to the party’s mantle as being “The Party of Lincoln” and to do the right thing, even though Republicans would get zero credit from black voters for stopping Democrats like former Klansman Robert Byrd from defeating the bill. After Dirksen’s speech, 27 out of 33 Republicans joined with Dirksen in ensuring equality for blacks, even as 22 Democrats voted to keep the filibuster alive, and therefore ensure the bill’s defeat.

4.) Answer: B. Barry Goldwater. Goldwater’s July 16, 1964, Acceptance Speech at the Republican National Convention in San Francisco, California, is striking in that it stuck firmly to conservative convictions and seemed to almost taunt anyone who disagreed. While Goldwater’s bid for the presidency ended in a landslide defeat, out from the electoral ashes rose a young breed of principled and committed conservatives who propelled the movement for the generation to come.

5.) Answer: D. Ronald Reagan. Ronald Reagan’s speech, “A Time for Choosing,” (AKA “The Speech”),was delivered and televised October 27, 1964, in support of Barry Goldwater’s presidential bid. The speech electrified the television audience and showcased Reagan’s political talents while utilizing his skills as a Hollywood actor. The speech put Reagan on the national political map and two years later he became Governor of California.

6.) Answer. C. Clare Boothe Luce In the pantheon of figures associated with the American conservative movement, perhaps none has lived a more eclectic life than playwright, journalist, congresswoman, and ambassador Clare Boothe Luce. In her 1978 address, “Is the New Morality Destroying America?” Luce attacks the moral corruptions of a sexually permissive culture and offers a prophetic warning about what such attitudes may mean for America’s future.

7.) Answer: A. Ronald Reagan. President Reagan’s January 20, 1981, Inaugural Address represents awatershed rhetorical event wherein a president declares government the problem. The speech was also unique in that it broke presidential tradition and was delivered on the West Front of the Capitol.

8.) Answer: D. Ronald Reagan. President Reagan’s “Evil Empire” speech, delivered on March 8, 1983, before the National Association of Evangelicals in Orlando, Florida, sent shockwaves through the media universe. Reagan’s speech cited Scripture and the words of C.S. Lewis and argued that the Cold War and the Culture War were really a spiritual battle. Not surprisingly, liberals and European elites shrieked in horror.

9.) Answer: D. Phyllis Schlafly. On June 28, 1987, conservative icon Phyllis Schlafly appeared before the Conference of the Legal Services of the NYC Board of Education and delivered her powerful speech, “Child Abuse in the Classroom.” Schlafly, best known as the woman who single-handedly brought down the Equal Rights Amendment (ERA), is frequently cited by many female conservatives—Ann Coulter most notable among them—as a hero (or “heroine,” as liberals would have it).

10.) Answer: C. Barbara Bush. While not often thought of as a “conservative icon,” First Lady Barbara Bush’s Wellesley College commencement speech drew national attention when feminist students protested Mrs. Bush’s invitation to speak at Wellesley (Hillary Clinton’s alma mater) and sparked a national controversy. The feminist protestors objected to Barbara Bush as commencement speaker because she had made the choice to be a stay-at-home mother. Bush’s speech, which was recently rated by top scholars as one of the top 100 American speeches of the last century, challenged Americans to support a woman’s right to choose whatever career path she wished. Bush won the audience over with her stirring address and received a standing ovation.

11.) Answer: D. Newt Gingrich. On January 4, 1995, Newt Gingrich stood before the congress and delivered his Acceptance Speech as Speaker of the House. The speech laid out the blueprint for the Contract with America, the proposal that helped break Democrats’ 40-year reign and take back the congress.

12.) Answer: A. George W. Bush. Roundly considered President George W. Bush’s finest rhetorical performance, Bush’s September 20, 2001, address before a joint session of Congress was watched by an estimated 80 million Americans. In the speech, Bush laid out his doctrine for fighting and winning the War on Terror. As Bush said in his speech, “Whether we bring our enemies to justice, or justice to our enemies, justice will be done.” Also: “We will not tire. We will not falter. We will not fail.” Apparently Sen. Harry Reid missed that part.<