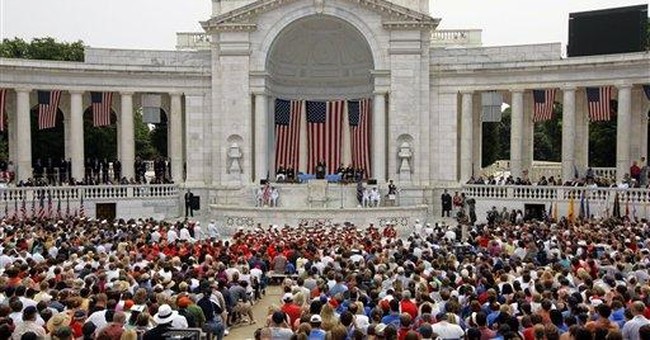 This Memorial Day week – I say week, because Monday was MD observed, Wednesday is MD actual – we remember lives lost in all of America’s wars since 1775. But I personally feel it is especially important to remember the most recent losses.

This is not to suggest that recent losses are somehow more important than those of the past. They’re not.

But to the families of our soldiers, sailors, airmen, Marines, and Coast Guardsmen killed in action since 9/11, the losses are still so grievously raw. And it would be selfishly shameful for any one of us to forget that, or them (the families).

I’ve certainly lost Marine buddies and other friends in peace and in war. I’ve lost family members very close to me. I’ve known parents who’ve lost children (my mother lost my younger brother, and my stepdad lost two of his own). But the experience of loss doesn’t make the knowledge of others’ losses any easier. In fact, I would argue, it makes it tougher: Because we know how bad losses hurt, and how deep and endless those voids seem.

Which brings me to this Memorial Day week; those who have been killed in the service of our country; and a new book, Faces of Freedom, I helped write and edit.

I’ll get to the book in a moment. First I want to share a bit of one of the conversations I had – while working on the book – with the mother of soldier who was killed in Iraq. I want to share this because it speaks so much to the heart of a fresh loss: Something so many Americans fail to consider as the terrible price paid for our freedoms.

Last year, I interviewed Regina and Robert Gilbert of Brattleboro, Vermont, a mom and dad who lost their only child, Kyle, a 20-year-old paratrooper with the Army’s 82nd Airborne Division in early August 2003.

I’ve interviewed many people over the years, but this was probably the toughest.

In fact, following my initial conversation with Regina, I was so emotionally stirred; I had to phone a close friend to get past it for the moment so I could get to the rest of the day’s work (Other contributors later told me their experiences were similar.).

Regina began by telling me about Kyle, and the incredibly close “let’s-do-everything-together” life the three of them shared before Kyle was killed in Iraq. As a little boy, Kyle loved Mickey Mouse, pirates, and Teenage Mutant Ninja Turtles. As a young teenager, he was in to martial arts. When Kyle became a paratrooper, Robert – a former Special Forces soldier – had the honor of pinning a pair of silver airborne wings to Kyle’s chest.

Following the attacks of 9/11, Regina and Robert received a phone call from Kyle, then stationed at Fort Bragg, N.C.

After Kyle deployed to Iraq, the Gilberts received a few calls from him – every chance he had. “He really didn’t talk about where he was or what he was doing,” Regina tells me. “He just wanted to know how we were, how his friends were, and how his car, a ’69 Chevelle, which he had put a lot of time into, was doing.”

During one of his calls, Regina called him Bud-bud (Her nickname for Kyle). “I could tell he loved hearing that, because I could tell from his voice he was holding back tears,” she says.

Kyle’s final call was received on July 18, 2003. He said he missed home, he wanted to come home, and “we’re making strides.” Then out of the blue – before Kyle and Regina were inadvertently cut off by the loss of the satellite signal – Kyle said, “Mom, don’t forget me.”

Regina, says she almost came unglued. “What do you mean don’t forget you?!” she said. But the signal was gone. She took a deep breath, and went on with her life.

Then came that terrible day.

“I had this ritual when the war started,” Regina says. “I would go into the cafeteria at work and get coffee and a copy of USA Today. I’d get there at 6:30 am, so I could read the paper.”

On August 7, Regina picked up a paper and read where two soldiers from the 82nd had been killed in action. The name of one of the soldiers was published. The other, pending notification of the family, had not been released.

Unnerved by the unknown death from Kyle’s unit, Regina recalls telling her co-workers how “scary it is” to read that.

The following morning was much worse. Regina was again at work when she received a call from Robert.

“He said, ‘I’m coming to get you. Pick up your purse, and I’ll meet you downstairs,’” she recalls.

Robert then told her there was an Army officer who needed to speak to them together.

“I knew. I just dropped the phone and ran into one of my bosses’ offices and locked the door. I wanted to believe that if I never went outside again, it wouldn’t be true.”

But it was true. Kyle had been killed during an attack in Baghdad.

It was painful for Regina to recount this story, as I know she has done countless times in her head. It’s almost impossible to imagine the pain. But thousands of families have and will continue to experience it.

But America is at war. Americans in uniform and their families are sacrificing for the greater good of this nation and the world everyday.

Why the book? The idea began in 2005 with Rebecca Pepin, an evening news-anchor with Bristol, Virginia's FOX News affiliate WEMT. Pepin was regularly reporting losses of troops and how families were coping. So she decided to give something back.

In January 2006, she contacted me about helping her out with the writing and editing of Faces of Freedom, which would honor Americans who had lost their lives in the Global War on Terror.

The book, just released, is a compilation of stories of the lives of men and women from all 50 states, the District of Columbia, and Puerto Rico, who have been killed in Iraq and Afghanistan since 9/11. .

The stories were written by a team of volunteer professional writers and editors, and all proceeds from sales are going to Fisher House and The Wounded Warrior Project.

How do Regina and Robert endure the pain of the loss?

“Things like this book you are doing helps,” she says [crying]. “I don’t want anyone to forget about Kyle. It also helps us to be with other families who have lost children.”

I would add it helps Americans step outside of “the mall,” and appreciate what American families at war are sacrificing for us all.