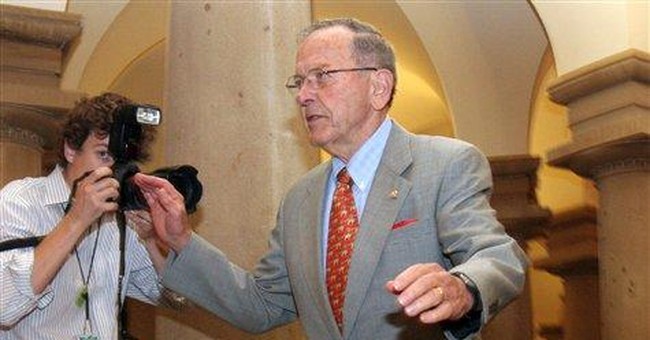 Voter dissatisfaction with the United States Congress was already dropping like a rock prior to the revelation that Rep. Bob Filner (D-California) had been charged with assault and battery for allegedly shoving a female airline attendant when his luggage didn't come out fast enough.

Of course it's probably a good thing Filner's bag was merely delayed (and not lost) or else we could have had the makings of another Rambo or Die Hard film on our hands.

Sadly, Filner's fury is only the latest manifestation of a growing Congressional contempt for the citizens it represents. And while it may not be as egregious an example as the $90,000 in cash federal agents found last year in the freezer of recently-indicted Rep. William Jefferson (D-Louisiana) or the far-reaching abuses unearthed during the Abramoff lobbying scandal, it is nonetheless symbolic of the same "do as I say, not as I do" mentality that has Congressional approval ratings at an all-time low.

Thankfully, however, there appears to be a limit to the arrogance and contempt a system can dish out to its subjects before it begins receive a little bit of the same in return.

Which is precisely what we're seeing now, as the summer months have brought with them a fresh batch of political scandals – most notably the saga of powerful Sen. Ted Stevens (R-Alaska), whose home was raided in July as part of an FBI investigation into yet another bribery scam.

According to the results of a Gallup poll conducted from August 16-19, only 18% of Americans currently approve of the job Congress is doing – the lowest rating since Gallup began tracking Congressional approval in 1974 during the Watergate scandal.

Simply put, Americans do not trust their government anymore. Leaders of both parties have lost the confidence of those they were elected to serve, having repeatedly sacrificed their ethics and the best interests of the taxpayers for personal gain and the expansion of their own political power.

Cash in the freezer. FBI raids. Shoving airline attendants. Honestly, who are we dealing with here? The Mafia or a democratically-elected government?

Even as it passed a so-called "landmark" ethics reform bill this summer, Congress still refused to address the heart of the "trust issue." Rather than insist on real transparency in the way it spends taxpayer dollars, as Sen. Jim DeMint (R-S.C.) and others insisted that it do, Congress instead preserved the eminently-corruptible practice of "earmarking," or anonymously attaching secret pork barrel spending items and legislative pet projects onto larger bills.

Not surprisingly, the passage of this massively mediocre reform bill did nothing to level off the precipitous decline in public trust.

Fortunately, the one silver lining in this cloud of corruption and taxpayer waste is that the time is finally ripe for long-overdue reforms – not more of the same old knee-jerk half-measures that sound so sweeping and substantial at cocktail parties, yet feature more fine print than a warehouse full of phone books.

With the public all but unanimous in its disdain for the status quo in Washington, D.C., it's time for voters to take the next step and rally around a positive platform that will end once and for all the special interest stranglehold and resulting scandal factory that has engulfed our nation's capital.

By endorsing term limits for legislators and demanding that Congressional leaders impose the same draconian restrictions on their own conduct that they impose every day on the conduct of citizens, businesses and local municipalities in their districts, perhaps the playing field can truly be leveled and America's confidence in the fairness of its government can truly be restored.

Now more than at any point in its history, our country needs a steady rotation of principled, taxpayer-conscious citizen-legislators bound by a transparent, loophole-free code of conduct. Now more than ever, we need term-limited government leaders who recognize the simple, unalterable truths that their money is our money, their openness is our freedom and their responsibility is our future.

An 8.8 trillion dollar national debt. An imminent Social Security nightmare. An epidemic of chronic disease, poverty and educational inadequacy. Are these not problems that can only be solved by a government with the confidence of the American people?

Given the universal acknowledgement of how miserably the current system of graft and patronage has failed on each one of these accounts, it would seem now that whether or not we finally get the government we deserve depends only on how loudly we insist on it.

Bill Wilson is President of Americans for Limited Government, a non-partisan advocacy organization dedicated to restoring Constitutional principles and restrictions on government power.