It's Down to McCain Versus Romney 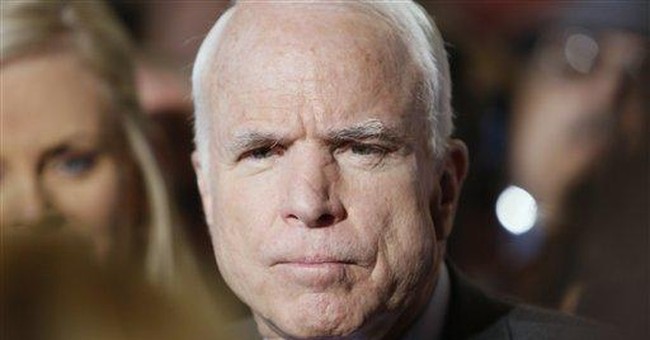 With the withdrawals of Fred Thompson and Rudy Giuliani from the contest, and the consistent failure of Mike Huckabee to build effectively on his evangelical base, the race for the Republican presidential nomination has effectively settled down to a two-man battle between John McCain and Mitt Romney.

At the moment, McCain probably deserves the title of "the front-runner." Until the Florida primary, McCain was vulnerable to the criticism that he had never been a winner in a purely intra-Republican contest. His previous victories were scored in general elections or in primaries (such as New Hampshire's and South Carolina's) that permitted independents, who tended to favor McCain, to participate in picking the Republican choice. In Florida, however, only registered Republicans could vote, and 36 percent of them voted for McCain. Another 31 percent supported Romney, while 15 percent went to Giuliani and 14 percent to Huckabee.

Even McCain acknowledged that 36 percent, in those circumstances, was no "landslide." But what makes the defeat in Florida painful for Romney is the fact that he had spent and campaigned heavily there for many months, and had expected a victory there to give his candidacy a valuable early boost. Instead, Romney must now make a pretty impressive showing in the numerous primaries being held on Feb. 5 -- and specifically, more impressive than McCain's.

It is unlikely (as of this writing), however, that McCain can do so well on Feb. 5 as to knock Romney out of the race altogether and in effect nail down the nomination. The contest between the two is likely to drag on for several more months.

And that presents conservative Republicans with a problem. Neither McCain nor Romney is, historically, a certified, dyed-in-the-wool conservative of the sort that other typical conservatives instinctively feel comfortable with. To be sure, the Republican party is dominated overwhelmingly, today, by conservatives, and both McCain and Romney are now proclaiming their undying conservatism to the heavens. But McCain has a long record of deviations from the straight conservative path, and Romney rose to prominence by winning the governorship of Massachusetts, a distinctly liberal state where he took care not to offend the voters too much. That these two men have survived the political preliminaries to become the final contenders for the Republican nomination is owing more to sheer chance than any vestigial trace of liberalism in either of them; but it does raise, for conservatives, the delicate question of which of them to choose.

Based on issues alone, a conservative might be inclined to favor Romney, whose record is perhaps marginally closer than McCain's to conservative orthodoxy. But one has to admit that there is a certain powerful attraction in McCain's overall persona. He is, after all, an indisputable war hero. What's more, he comes across as slightly more combative than Romney in a way that might prove highly useful in taking on Hillary Clinton, or even Barack Obama.

In any case, conservatives need not worry that the fact that they must choose between Romney and McCain demonstrates (as some hopeful liberals have begun arguing) that the GOP is in some way loosening its ties to the conservative movement. The strenuous efforts of both men to win the approval of that movement tells us all we need to know about its strength in the Republican party. If either of them shows the slightest tendency to backslide, he will suffer immediate vengeance at the polls.

Which brings us to a final point: After eight years of Republican dominance in Washington, the normal tendency of American politics will be for 2008 to be a Democratic year. If it is, whether Romney or McCain makes the final decision on the exact distribution of deck chairs on the Titanic will be of purely historic interest.