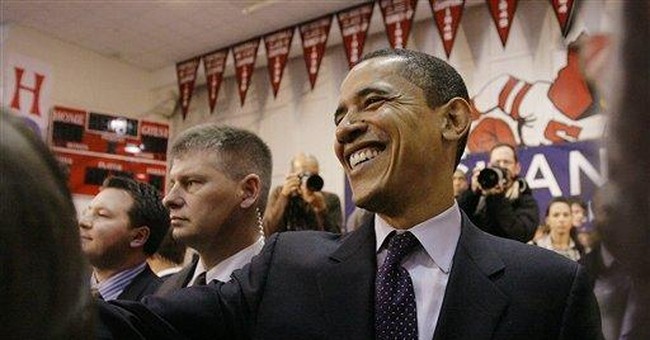 The sweeping victory of Barack Obama in Iowa's Democratic primary seems to have generated a kind of electric shock among political observers. Suddenly it seems possible, allegedly for the first time, that a black candidate may actually be able to win a presidential nomination and then go on to take the White House in November.

Actually, it isn't all that novel an idea. As recently as 2000 it seemed entirely reasonable that Gen. Colin Powell might seek the Republican nomination, and receive it. And if he had, there were plenty of observers (the present writer among them) who thought he had an excellent chance of being elected president. It was reportedly only his wife's adamant opposition to the idea (she was convinced he would be assassinated) that prevented him from trying.

The idea of a black person becoming president of the United States, therefore, is no earth-shaking novelty. It is true that democracies tend to choose as their leaders people drawn from their dominant ethnic category, which in the case of the United States is still overwhelmingly white. But this is a notoriously pluralistic society, and black Americans have already made their mark in almost every aspect of public life, including both business and politics. There have been innumerable black business executives and politicians -- so many, in fact, that the possibility of a black president has been a reality for years.

What has prevented it from happening before now is a simple fact of political life: That voters tend to vote for candidates with whom they can, in some way, personally identify -- someone of roughly the same political views (of course), the same economic background (a small businessman or whatever) or the same ethnic roots. There is nothing sinister about this, and the rule is subject to all sorts of saving exceptions.

What confronts us in the case of Obama, therefore, is not some unprecedented or unthinkable lesion in the political universe, but simply the incidental fact that he happens to be black, and that is hardly momentous. The real question with Obama, as with any serious contender for the presidency, is his qualifications for the job. And it is here, I submit, that he turns up seriously short.

His first political office was as an Illinois state senator -- a post he held for eight years, from 1996 to 2004. He then won the Democratic nomination for the United States Senate, and was elected that November. He has served in the Senate for a little over two years. That is his entire record in public office, and on that basis he now seeks to become president of the United States.

What would we be thinking of Obama today, if he were white instead of black? Am I being hypercritical to suggest that such a record sounds like a pretty thin basis for a presidential campaign? Eight years in Springfield, Ill., and two in Washington?

Yet, because he has done well in the early presidential primaries, we are invited to disregard his anemic record. True, he has been running largely against Democratic old-timers: Hillary Clinton, who has been a fixture on the Washington scene since 1992, and John Edwards, a former U.S. senator who is seeking his party's presidential nomination for the second time. But Obama has no significant achievements in Washington to his credit, and whatever he did for Illinois in its state senate in eight years can be left for the citizens of that state to contemplate.

In short, it's difficult to see anything in Obama's record that qualifies him for serious consideration as a presidential candidate, and we are left to conclude that his major asset is what we are all highmindedly supposed to disregard in evaluating him: the fact that he is black. And that alone, I submit, is simply not enough.