Deadlock on the war 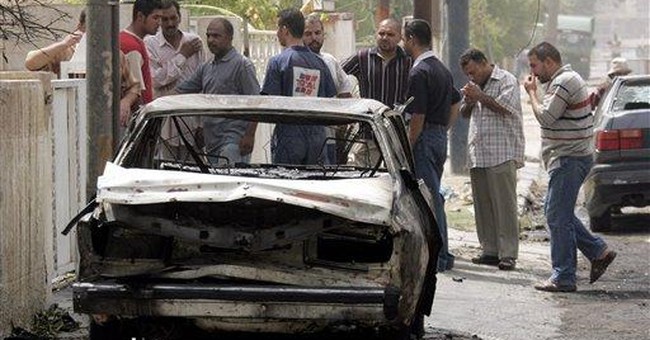 It's hard to think of a historical parallel for the grim deadlock between the two major parties over U.S. policy in Iraq. In Vietnam the Democrats (who had gotten us into that quagmire in the first place) were certainly viewing it very negatively indeed by 1968, and once Lyndon Johnson decided he would not even run for re-election they tried eagerly to hang its continuation around the Republicans' necks. But in his 1968 campaign, Richard Nixon insisted he had a "secret plan" for ending the struggle, and he never subsequently defined his goal as "victory."

Today, however, the Democratic Party is about as united (bar Joe Lieberman) as any party is likely to get on the proposition that the United States ought to pull the bulk of its troops out of Iraq by a stated deadline -- mostly recently April 30, 2008. And the Republicans, despite stated reservations by a few senators and congressmen running for re-election next year, seem likely to stand behind President Bush in his declared intention to continue military involvement in Iraq until we have prevailed over the forces trying to destroy the country. What's more, the GOP can probably continue to muster the 40 votes it needs in the Senate to block passage of a Democratic bill there, let alone the 34 that are all it would need to sustain a presidential veto.

The Democrats interpret their takeover of the House and Senate in the 2006 off-year elections as a clear mandate from the American people to give up and pull out of Iraq. The Republicans think public opinion is a bit more complicated than that. A majority of Americans, after all, supported the attack on Iraq when it began in 2003, and while most of them unquestionably think the war has gone badly and that we would be well off ending it if we could, that is far from saying that they favor deciding that we have "lost" and pulling out regardless of the consequences. More likely a majority, if polled today with a sufficiently sophisticated series of questions, would favor continuing military operations without a deadline for withdrawal, while working hard to train and equip the Iraqi government to take over the major burden of defense. That is not far from the GOP's position.

That is not to say, however, that the Republicans can count on a majority of voters in next year's elections supporting their candidates, either for the presidency or for Congress. Most people blame the Republican Party for leading the country into a war that has turned out so badly, and they will be understandably reluctant to give it the job of extricating us. For one thing, they don't necessarily believe that the Democrats would really pull the plug on Iraq, let alone the whole Middle East, despite their current rhetoric.

And that raises the really fascinating question: What would a Democratic president and Congress actually do about Iraq, if (as seems likely) they win in 2008?

Individual Democratic politicians may insist that the consequences of a pullout would be less serious than many believe. But this is largely mere oratory, designed to make the Republicans look unnecessarily stubborn for continuing the war. At a minimum if we pull out, Iraq will dissolve into a chaotic civil war, in which it is hard to see how forces sympathetic to Al Qaeda could fail to prevail in the long run over such democratic impulses as exist there. Iran and Syria would feel justified in their opposition to U.S. policies, and would move quickly to consolidate their alliances in Iraq. The relatively moderate Arab countries -- Jordan, Egypt and Saudi Arabia -- would all lose serious face for their willingness to go along with the Americans, and democratic forces throughout the Middle East would be gravely weakened. The whole region would become vastly more sympathetic to the Islamist terrorists, who would simply step up their attacks on the West, including the United States.

It is hard to believe that any probable Democratic president would fail to realize the likelihood of this scenario, or refuse to act to prevent it. He (or she) might have to face down such leftist forces in the Democratic Party as MoveOn.org, but he would surely have the support of the great majority of Democrats, not to mention a chastened GOP. In any case, a very great deal will hang on the Democrats' decision.