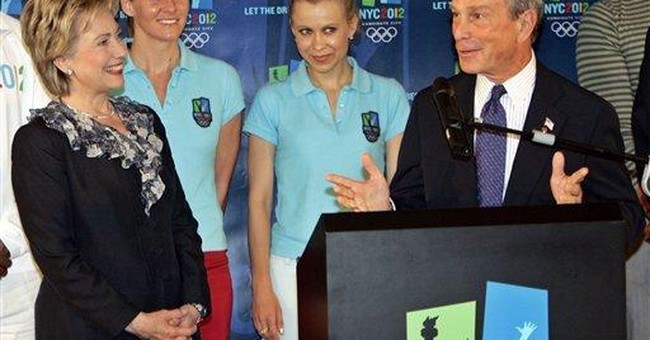 Anyone who doubts the vitality of the American political system must be reassured by the number of people seeking the presidency. It's a fair question why anybody would want the job, but there are roughly a dozen hopefuls in each party out there running for it, and now New York City Mayor Michael Bloomberg has let it be known that, if the conditions look right about seven months from now, he may abandon both parties and spend a billion or two of his $5 billion on an independent bid. What does a handicapper do with a field like that?

Start with the Democrats. Here, Hillary Clinton probably deserves the title of "front-runner." She leads the polls; she has buckets of money; and, in Bill Clinton, she has the shrewdest political adviser in either party, ready to supplement her sometimes tin ear for political subtleties with his own sage counsel. It's hard to see a rival who looks likely to upend her.

John Edwards, Bill Richardson and the long list of other Democratic wannabes have all failed (at least so far) to catch fire, and the steady drumbeat of mayors, congressional leaders and assorted politicians who have endorsed Clinton testifies to their calculation that she is the likely nominee. Barack Obama, who burst onto the national political scene a few months ago with a flood of favorable publicity, has settled into second place in the polls, and seems likely to wind up where many observers have always calculated he belonged: in the vice presidential slot on her ticket.

Only former Vice President Al Gore (who hasn't even said he's running) fails to fit the template. He is nationally known and widely respected, and, after all, he actually got more votes than George W. Bush in 2000, though their distribution among the states prevented him from winning a majority in the Electoral College. But he is inescapably yesterday's news, whereas Hillary has not yet "had her chance." It is true that the American people sense in her an unappealing steeliness, which probably accounts for her high negatives in polls that seek to rate mere likeability. But that calculation is more likely to affect her chances in the general election than in the race for the nomination.

As for the Republicans, they have a zoo of their own, and not even a candidate who can plausibly claim to be the front-runner. Why anybody would want the Republican nomination is a mystery, given the party's gloomy prospects for 2008, but hope springs eternal, and never more so than in the case of politicians who consider themselves presidential material.

John McCain, who overshadowed his rivals a few months ago, has faded markedly, in part because of his no doubt courageous, but politically foolhardy, support for the immigration "reform" bill, which is anathema to most Republicans.

Rudy Giuliani consistently tops the polls, and it may be that I am underestimating his staying-power, but I am by no means the only observer who thinks that his popularity among Republicans will sag markedly when they realize (as most of them have yet to do) that he is loudly pro-abortion, pro-gay rights and pro-gun control.

Mitt Romney has conducted a flawless campaign thus far, and his looks and clothes are right out of Central Casting for a Republican presidential candidate. But his appearance and performance have been so good that, perhaps unfairly, a lot of people wonder if they aren't too good to be true. Still, the polls have him ahead in the key primary state of Iowa, and it would be foolish to count him out prematurely.

The wild card in the Republican deck is, of course, Fred Thompson, the former Tennessee senator whose known views on the issues fulfill the fondest dreams of conservative Republicans. But Thompson hasn't even declared his candidacy yet, and the rumpled charm that has made him so popular on "Law & Order" may turn out to be more an artifact of television than a fact of life.

So will America opt for Bloomberg? It hardly seems likely. But his candidacy could easily determine which of the two major-party candidates will win. Say what you will about the confusion, living in a vibrant democratic society sure beats living in a dictatorship when it comes to excitement.