Can we afford more low-skilled immigrants? 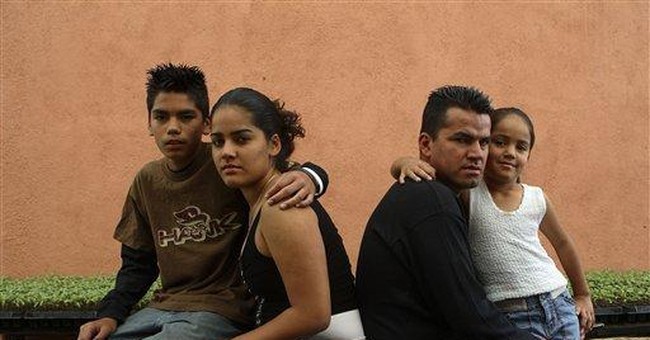 The cynical coalition of partisan Democrats and greedy businessmen (the latter bringing along a significant number of Republicans, including President Bush) who are backing the immigration "reform" bill have run into a lot more serious opposition than they counted on. As a result, the bill contains some tough provisions that will be quietly repealed within a year or two after it has passed, and the American people have gone back to sleep.

Meanwhile, the coalition (which really just wants tens of millions more of cheap immigrant laborers to work for the businessmen and vote for Democrats) is treating us to a lot of soft music about how America was positively founded on hard-working immigrants who were eager to do the jobs that "Americans won't do." It's a heart-rending story, but exactly how much benefit does this country derive from the millions upon millions of immigrants, legal and illegal, who have flooded this country since Sen. Ted Kennedy first opened the gates back in 1965 (having spearheaded "reform" that eliminated national origin quotas)? A recent study by the conservative think tank Heritage Foundation sheds some astounding light on this important question.

Today, there are approximately 4.5 million households in the United States consisting of low-skilled immigrants, both legal and illegal. According to Robert Rector and Christine Kim, the Heritage analysts, these households paid an average of $10,573 in taxes in fiscal 2004. Now, multiplied by 4.5 million, that's a lot of money. But these same low-skilled immigrants also received, in government benefits and services, an average of $30,160 per household (which, incidentally, is about $10,000 more in services and benefits, mostly welfare payments, than the average U.S. household received). Subtract their taxes from their benefits, and it turns out that the 4.5 million low-skill immigrant households hauled in an average $19,587 more in benefits and services than they paid out in taxes.

According to the Heritage study, that means that, to American taxpayers, the net cost (benefits minus taxes) of low-skill immigrant households over the next 10 years "will approach $1 trillion." (That's "trillion" with a "t" -- 1,000 billions.) That's a lot of money for the American people to shell out to swell the ranks of Democratic voters and provide businessmen with a huge influx of cheap, largely Mexican labor. Just how "low-skilled" are these people? In the adult U.S. population as a whole, the number lacking a high school diploma is 9 percent. But according to the Pew Hispanic Center, the figure among legal immigrants is 25 percent. And among the more than 10 million illegal immigrants already in the country it is at least 50 percent.

As the Heritage study points out, the average American tends to be a "net taxpayer" during his or her working years -- that is to say, pays the government more in taxes than the cost of the services he or she consumes. Then, in retirement, we become "net tax takers" -- receiving more in benefits than the taxes we pay.

Not so in the lucky households of low-skilled immigrants! Whatever the age of the head of household, the benefits received by low-skilled immigrants (i.e., those without high school diplomas) "far exceed" the taxes they pay. In fiscal 2004 alone, their net haul was $89.1 billion. And Rector and Kim calculate that, assuming an average adult life span of 60 years for each head of household, the average lifetime cost to the taxpayers will be nearly $1.2 million for every low-skill household.

So taxpayers, get ready to show your compassion if the current immigration "reform" bill gets through Congress.