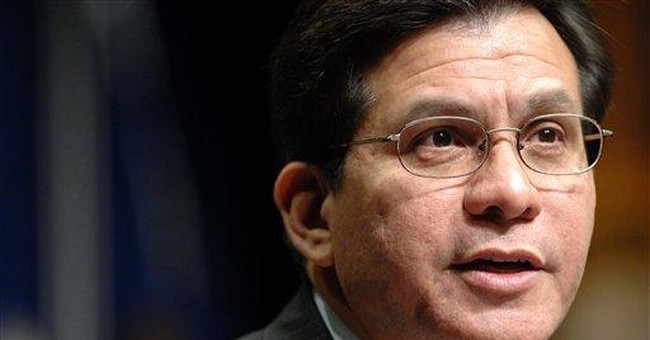 In recent years, we have all been introduced to the concept of the "victimless crime." This is a situation in which a crime seems to have been committed, but there is no apparent victim. That raises interesting questions for law school classes to chew on -- e.g., ought the perpetrator of the crime to be punished?

Now another sort of anomaly is appearing, which might be called the "crimeless victim." This is someone whom the government, or some branch of it, is determined to regard as a criminal, and punish as such, even though he or she has not in fact committed any crime. The first notable example of a "crimeless victim" is Attorney General Alberto Gonzales.

Gonzales has been subjected to a merciless grilling by the Democrats in the U.S. Senate, most notably Sen. Charles Schumer, D-N.Y., and his fellow Democratic members of the Senate Judiciary Committee. They have zeroed in on the dismissal by the Bush administration of six (or, depending on how you count, seven) of the 93 U.S. attorneys scattered around the country who are charged with prosecuting offenses against the United States.

Now, U.S. attorneys serve "at the pleasure of the president," and he (and his authorized agents) have the power to fire one or more of them for just about any reason, including the way he or she cuts their hair. It would, however, be inappropriate, if not illegal, to fire one of them simply because he was suspected of being too eager to prosecute Republicans, or too forgiving of culpable Democrats. That is what Schumer and his colleagues believe, or profess to believe, was the motive behind the dismissal of one or more of the aforementioned six.

Logically, they (and the liberal media who serve their interests) decided that the chief villain must have been Gonzales, since the dismissals occurred in his department and on his watch. In his first comments to the media, when they inquired about the firings, Gonzales was hazy about the details, explaining that he personally had not participated actively in the process.

That was enough for Schumer. If Gonzales could be shown to have been personally to blame, a major campaign to force his resignation could be mounted, and his downfall would certainly damage President Bush (who is, after all, the Democrats' real target). Newly invested with the subpoena power, thanks to the Democrats' takeover of Congress last November, they demanded that he testify before the committee under oath (to which he agreed, though as a member of the executive branch he cannot be compelled to do so). There followed the above-mentioned grilling, in which once again Gonzales' answers were deemed unsatisfactory. His recollections were vague, and his memory poor. The Democrats were furious.

But the simple fact is that Gonzales has not been proven to have done anything wrong -- anything at all. The dismissals were, as he testified, decided on by subordinates, and for reasons that were by no means necessarily inappropriate. (One U.S. attorney, for example, seemed unwilling, for reasons of her own, to prosecute people who smuggle illegal aliens in from Mexico.) Last week, Congress finally found a single subordinate Justice official, Monica Goodling, who -- after first threatening to plead the Fifth and receiving immunity for her testimony -- told the members that she had indeed, in a few cases, asked "inappropriate" political questions about the U.S. attorneys' political views, and now regretted it.

But she also flatly denied ever having discussed the dismissals with either Bush's top political advisor, Karl Rove, or White House Counsel Harriet Miers (whom the senators would also dearly love to skewer), let alone Gonzales. Nonetheless, the hullabaloo is mounting, and the demand is for Gonzales' head. So poor Alberto Gonzales has become Exhibit A for that latest legal anomaly, the crimeless victim. Do not send to know for whom the bell tolls -- next time, it may toll for thee.