The Democrats take over the war 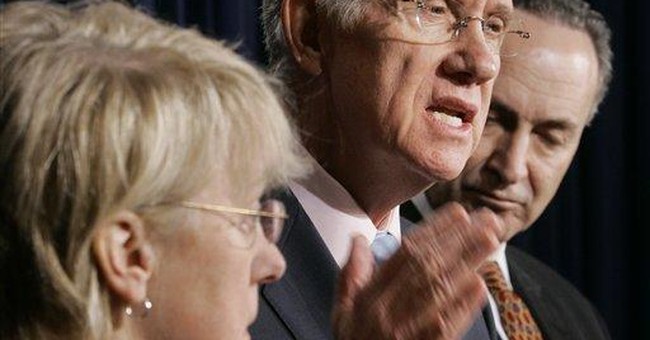 It is said that if enough monkeys were set to work poking randomly at enough typewriter keys, one of them, on the sheer law of averages, would sooner or later write "Hamlet." By the same token, if enough Democratic Congressmen try long enough, one or another of them may someday come up with a rational alternative plan for American military involvement in the Middle East. But it hasn't happened yet, and the signs are not encouraging.

The central fact, at least from the standpoint of Democratic strategists, is that, according to the polls, a substantial majority of the American people has given up on Iraq and favor withdrawing our forces there. Whether this is true can still be debated, because some of the polls indicate that most Americans don't favor an immediate bug-out (as distinguished from one or another sort of phased withdrawal), and a surprisingly large percentage tend to favor one final push, along the lines of President Bush's "surge." But, as the Democrats see it, the American public has clearly had it with the general idea of U.S. military action in Iraq. And if so, it doesn't take a rocket scientist to see that there is political gold for the Democrats in coming out against it.

The devil, however, is as usual in the details. There are almost as many Democratic proposals for pulling out of Iraq as there are Democrats in Congress. First are the pure-and-simple bug-out advocates, like Sen. Russ Feingold (Wisconsin). They simply want our soldiers to get up and leave -- the sooner the better. Then there is the idea that, for a long time, was Speaker Nancy Pelosi's only "plan": to "redeploy" our forces -- out of Iraq, to someplace else. Just where that "someplace else" might be, she never got around to saying, but it might theoretically be anyplace between Kuwait and Okinawa.

It also might be home. In Nancy's house, there were many mansions. (But "redeploy" sounds nicer than "bug out.")

Another group of Democrats, including Sen. Clinton, opposes bugging out now, preferring to bug out on some later date (six months from now, the end of this year, next March, or eighteen months from now). This date is called a "deadline," and is often linked to a demand that Iraq's Prime Minister Nuri al-Maliki government do something by that date. That would give us the excuse that it was the Iraqis, and not we, who did the actual failing.

A more sophisticated way of avoiding blame has recently been hit upon by Congressman John Murtha, who originally favored Pelosi's "redeployment" strategy. Murtha has now introduced legislation that would deny funding for further forces in Iraq unless they are "fully" equipped, have not served in Iraq on previous tours, and meet other stringent conditions, the net effect of which would be to prevent any reinforcements at all. This would effectively compel the withdrawal, fairly soon, of the troops we already have there.

Then there are those like Sen. Joseph Biden (Delaware), who are skittish about limiting funds for our troops, and favor repealing Congress's original authorization of the war on Iraq, for which so many Congressional Democrats voted. This requires believing that the Constitution, which gives Congress the power to declare war, also allows it, four years later and in the midst of battle, to pull the rug out from under the commander in chief by withdrawing its authorization and giving him fresh instructions.

I could go on, but you get the general idea. The Democrats haven't the faintest idea how to bug out of Iraq without all sorts of ensuing disasters, but they are determined to express "the will of the American people" (if only they can figure out what it is).

The only thing they are really determined to do is lose. They don't feel guilty about this because they think it's inevitable anyway, and it can always be blamed on George Bush.