Beware of the golden boy 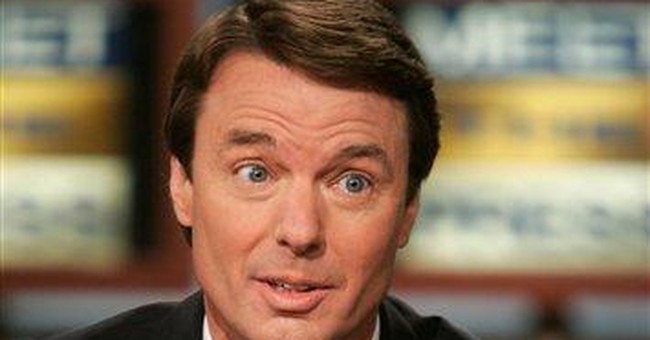 I will confess that, as a conservative with Republican leanings, I have long nurtured a healthy fear of John Edwards. As a former senator from North Carolina, who burst onto the political scene after amassing a huge fortune as a trial lawyer, Edwards has always seemed (not least to himself) destined for higher things. When the Democrats nominated him for vice president on John Kerry's ticket in 2004, I expected him to turn in a brilliant performance in the campaign.

Instead, he simply disappeared. I can barely remember seeing him mentioned in the media at all between the convention and election. In retrospect, it seems likely that this was largely the doing of Kerry's managers, who, quite simply, feared comparisons. They worried, with reason, that their man, who roughly resembles a badly kippered herring, would suffer in contrast to the youthful and strikingly handsome Golden Boy from North Carolina. If there was a photograph of the two of them together taken during the campaign, I must have missed it.

Edwards' single term in the Senate was up in 2004, and he courageously decided not to run again in order to devote his whole energy to the national race. (Compare Lyndon Johnson, who ran for re-election to the Senate in 1960 rather than bet his whole career on his simultaneous nomination as JFK's running-mate.) Since then, Edwards has returned to private life and prepared himself for a run at the presidency in 2008. Once again I have been surprised at his relative invisibility; but this may have been a deliberate strategic move, for he has now declared his candidacy and is starting to show up all over the place.

In all the obvious ways, Edwards is a formidable challenger. He may not be able (yet) to raise as much money from supporters as Hillary Clinton, but (as noted above) he has made millions of dollars as a successful trial lawyer, and could probably buy Hillary's mansions in Chautauqua, N.Y., and Washington out of his pocket change.

He is also fiendishly handsome, and looks gracefully young at 53. He has a good-looking family, and incurred considerable sympathy when his wife was diagnosed with breast cancer shortly after the 2004 campaign ended. (She seems to have been treated successfully since.) As might be expected of a successful trial lawyer, he is highly articulate, but blessedly free of legalese. He comes across as just an attractive North Carolina farm boy, who wants to do what is best for his country.

And what is that? In the Senate his most important vote was in support of our invasion of Iraq -- a vote he now frankly condemns as a "mistake." But in his politics in general, and especially since letting his ambitions for 2008 become known, Edwards has hammered out a position that is rather strikingly far to the left. For one thing, he wants us to start pulling out of Iraq -- now.

And, again and again, he has described the United States as consisting of "two Americas" -- one small and almost ridiculously rich, and another that is large and just barely scraping by. This is the politics of class envy with a vengeance, and Edwards seems convinced that it is exactly what the doctor ordered for the Democratic Party. On "Meet the Press" recently, he fleshed out this vision by putting forth a healthcare proposal that would cover all Americans, cost upward of $100 billion a year, and require increased taxes.

Finally, Edwards possesses one further attribute that gives him an edge over all the other serious candidates for the Democratic nomination: He is from the South. When you reflect that the only two Democrats who have been elected to the presidency in nearly 50 years were also Southerners, that is an asset not to be sneezed at.

Watching Edwards on television, I am torn between admiration of his finesse and a deep wariness over whether somebody so glib can possibly be real. A good many other Americans may come to share that doubt. But this country cheerfully elected Bill Clinton twice, and he was surely the King of Glibness. So keep your eye on John Edwards.