William Hazelgrove is the author of ten novels including Jackpine (2015) and The Pitcher (2013), a Junior Library Guild Selection. His books have received starred reviews in Publishers Weekly and Booklist, Book of the Month Selections, Junior Library Guild Selections, and ALA Editor’s Choice Awards. He honed his writing skills as the Ernest Hemingway Writer-in-Residence where he wrote in the attic of Ernest Hemingway’s birthplace.

He has been the subject of interviews in NPR’s All Things Considered, along with features in The New York Times, Los Angeles Times, Chicago Tribune, USA Today, Chicago Sun-Times, Richmond Times Dispatch, and People.

Hazelgrove lives in Chicago and also runs a political cultural blog, The View from Hemingway’s Attic. 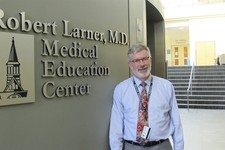 When a President Falls Ill: A Lesson from History
By William Hazelgrove
One would think there is protocol in place for when a presidential nominee falls ill, but surprisingly there is no ...
September 29, 2016
Commentary Archives
CARTOONS | Gary Varvel
View Cartoon