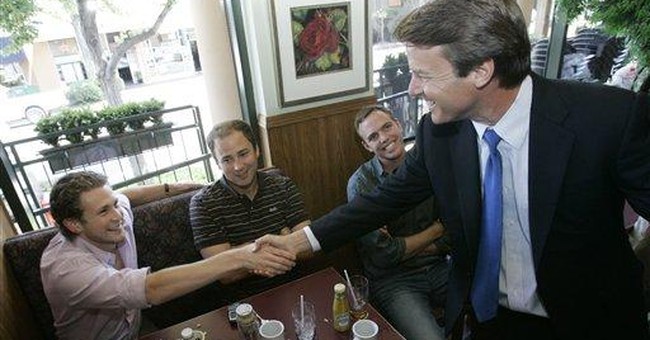 Trending
Robert Shrum has written a book in which he tells all, or at least leaves one hoping that what he has told is all there is to tell. If, in the dawn's early light, freshly empanelled fathers convened to found a civil society, you could discredit anybody who came up with the idea of political democracy by the simple expedient of handing him Robert Shrum's book, "No Excuses: Concessions of a Serial Campaigner." I interpose a personal note, which is that after a dozen hours with Mr. Shrum on television, I came away liking him, but this is testimony less to his virtues than to my weakness for happy scurrility.

Bob Shrum is a political campaign manager who has had great victories and spectacular losses. He has succeeded with dozens of senators and representativeds and governors but has failed in guiding eight Democrats who sought to be president. In this book he tells you with the candor of a postulant seeking holy orders what he does for you if you are his candidate. To be sure, you have to qualify for his patronage. You have to be left-minded, though not a doctrinal socialist. You have to have a prospect, even if dim, of success. You have to have access to money. And you have to have at least a measure of malleability: What's the use in hiring Bob Shrum if you are going to ignore all his advice?

Mr. Shrum tells us in his book about his dealings with his candidates. There are great stories told, and one doesn't want the reader to be discouraged by thinking that Shrum is opening up the equivalent of a pharmaceutical inventory of mind-altering drugs for the voters. There is enough méchanceté in Shrum's narratives to preserve the spice of modern politics. If venality were entirely spruced up, the descent to hell would be without any charm at all, and the very meaning of temptation would be lost.

Consider a single item. The year is 1988. George H.W. Bush has picked Sen. Dan Quayle as his running-mate, and Quayle is debating Democratic opponent Sen. Lloyd Bentsen. What is about to happen is one of the most decisive political wisecracks of modern times. Bush-Quayle went on to win against Dukakis-Bentsen, but for a moment, Bentsen's line dominated the news. Here is the story, as revealed by Shrum:

"In August I'd read Maureen Dowd's New York Times story on a Quayle press conference where he'd said: 'I'm very close to the same age as Jack Kennedy was when he was elected -- not vice president, but president.' What an opening, I thought then. Now, at the conference table, I predicted to Bentsen that, when the issue of experience was raised, as it inevitably would be, Quayle was likely to rehash what he'd been saying and invoke JFK -- in terms of their similar ages, or the number of years they'd served in the House and the Senate. Had Bentsen known JFK? Yes, he had served with him. Did he feel comfortable, if the chance came, telling Quayle that he was no John Kennedy? Sure. The moment was worded, practiced and polished in the mock debates. Bentsen went into the encounter with Quayle armed with a devastating rhetorical polyptych: 'Senator, I served with Jack Kennedy. I knew Jack Kennedy. Jack Kennedy was a friend of mine. Senator, you're no Jack Kennedy.'"

It doesn't surprise that candidates for political office inject theater into what they say and how they say it. But Mr. Shrum is willing to exhume almost any political event, to give its DNA and rob it, after the fact, of what claim it had to spontaneity. In his discussion of the training given to Al Gore for his debates with the younger Bush in 2000, we learn that Gore was told just how close to Bush physically he should go, for maximum effect, when they shook hands at the start of the debate.

What "No Excuses" tells us is indeed the inside story, and there is no reason to suppose that it is less than entirely accurate. But it leaves the reader wondering whether the inside story goes further than to give us to understand why Clinton won, or Bush lost. We are made to ask what it is that political democracy gives us. The system is utilitarian. But is it a fit object of faith and hope?