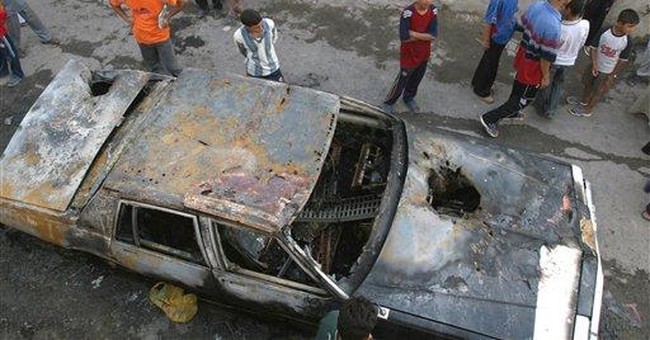 While it is true that no historical event exactly replicates another, it is certainly the case that what happened in Vietnam in 1972-1975 bears very closely on the current situation in Iraq.

To truncate the story drastically, what happened back then was the result of the correlation of four strategic factors:

(1) Hanoi's resolution to conquer the south. The North Vietnamese were held back by the failure of their spring offensive in 1972. That offensive was weakened by U.S. mining of the harbors and by the reluctance of China, in the swoon of the Nixon visit to Mao, to give full-bodied support to an invasion. But Hanoi simply bided its time.

(2) The withdrawal by the United States, ending in March 1973, of a combative military presence. Only a few hundred U.S. advisers were left in South Vietnam.

(3) The growing stability of the South Vietnamese government, which was assumed competent to carry out the terms of the Paris agreements of 1973. These agreements had been negotiated in dozens and dozens of meetings between Le Duc Tho and Henry Kissinger. The agreements called for the removal of U.S. forces, the cessation of North Vietnamese offensives, and recognition of the Saigon government as the ruling political entity in the south.

And (4) the progressive disunity of the United States government. Here we had the anti-war movement as a continuing force. But that movement attained dominance pari passu with the weakening of President Nixon. As Watergate metastasized from a "second-rate burglary" into grounds for the removal of a president, U.S. support for success in Vietnam wilted.

The parallels in the current situation are plain, beginning with the nature of the United States' participation. What we have right now is a progressively immobilized executive and a dissenting legislature, leading -- inevitably -- to an impotent military.

The question immediately posed is: Do we feel responsibility for what happens in the period ahead? The Iraqi government resembles the government of South Vietnam in 1973-'74 in that Baghdad is fighting, as Saigon fought, for a political system free of overweening foreign elements. But Saigon could not hold out in the long run without U.S. military support, and neither can Baghdad.

If the parallels hold, i.e., if the result of failure in the Middle East is equivalent to the result of failure in Indochina, then we would expect to see the collapse of the Maliki government in Baghdad, some kind of bloody vengeance against Iraqis who had supported that government, and a people subjugated by a regime that sits on 1 percent the world's supply of oil and is unlikely to proceed indifferent to the march, by Iraq's eastern neighbor, to becoming a nuclear power.

In the currency of human deaths, it is unlikely that we would match in Iraq what we stood by for in Vietnam. The statistics aren't even there to count accurately the casualties of defeat in that theater. But the most graphic symbol is the picture of Vietnamese, young and old, clinging to a U.S. helicopter in the desperate, final hope to be taken away from those waiting to torture and kill them. As stated, the statistics are not final, but somewhere between a quarter-million and 2 million or even 3 million Vietnamese suffered from our flight from the burden we first had undertaken, and then abandoned.

Henry Kissinger has said that the use of the American fleet to contain the invasion of 1975 could have saved the day. What could save the day in Iraq? Nothing short of public revulsion toward those Democrats who are measuring these days the political value of honor. In the election ahead, all the world will be looking over our shoulders, including the ghosts of Vietnam.