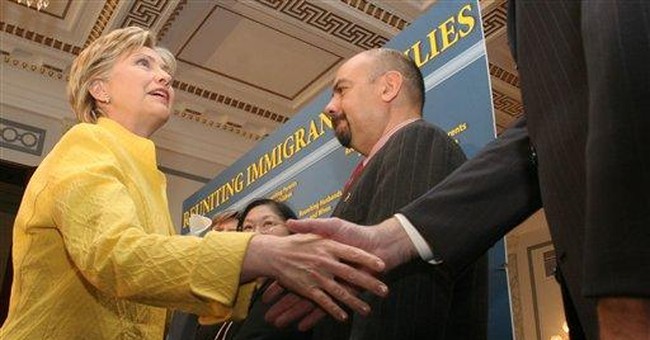 The immigration bill is a mess, but how could it be otherwise? Messes are a part of democratic rule.

There are several interests here seeking to be served simultaneously. There is (1) the existing illegal population of between 10 million and 12 million; (2) the labor needs of U.S. businesses; (3) the public sense of justice scorned and the public desire that some effort be made to rectify past neglect; (4) the anxiety to understand the political meaning of the bill, a creature given discordant life by a Hatfield and a McCoy. Legislators want to know whether the enduring fingerprint of the proposed measure will be that of Sen. Jon Kyl, R-Ariz., or that of Sen. Ted Kennedy, D-Mass.

Naked interests are nakedly present. Somewhere between 5 million and 10 million jobs are currently given to men and women willing to do work for which there is no felt calling in the legal labor market.

This is at the crux of a critical question. What should be the reaction of American workers? It was supposed, at the planning stage, that labor-union leaders would approve the amendments, but what has happened is that no one can answer authoritatively the question whether the licensing of the illegals jeopardizes the job security of native workers.

One consideration here is that we are at what is loosely speaking called full employment. The current unemployment rate of 4.5 percent suggests a labor market efficiently at work. But a spokesman for the AFL-CIO insists that the integration of several million workers into the legal market would have the effect of lowering the living standards of American workers.

Critics of the existing arrangements, which are simply latitudinarian -- there are laws respecting immigration, and people do not abide by them, so what? -- are telling us that the effect of laws not abided by is a distortion of the labor market. If the farmer isn't finding applicants for his apple-picking at $3 per hour, let him try offering $5 per hour.

But a producer always seeks to lower costs; that is his primary role in the market equation. So our farmer has simply continued to use illegal workers. Now he is faced with the legalization of the same people he was getting for $3, and contemplates the prospect of having to pay the minimum wage of more than $5.

The late Robert Bartley, the visionary apostle of the market, preached year after year against efforts to override the market. His doctrine would have eliminated any immigration laws, his faith in the market being such as to ordain its findings as transcending political considerations.

But realism does not always yield to economic dictation. It is one thing for the analyst to rule that the simple way to adjudicate the discrepancy between unemployment in Mexico and high employment in the United States is to let Mexicans move north until equilibrium sets in. But that overview simply denies basic cultural propositions. Societies are different, and they cannot solve every problem by merging.

The immigration bill stabs at these truths, but satisfies none completely. Sen. Richard Durbin of Illinois put it arrestingly. "This bill is drawing opposition from business, labor, Democrats, Republicans, theists and non-theists, American League and National League baseball fans. What I'm trying to say to you is there's more opposition to this bill than support (for it)."

The gnawing point for skeptics is the matter of realizing immigration laws. The current measure speaks of additional fencing to bolster those leaky barriers of past decades. But skeptics are entitled to wonder just when the dividing barriers would be made effective enough to freeze the flow of immigrants at the desired level.

Our lawmakers should understand the public skepticism. Theirs has been the responsibility in default. If Congress had begun reforms by stabilizing the Mexican border, it might more credibly have gone on to elaborate residually desirable changes in the mess Congress has permitted.