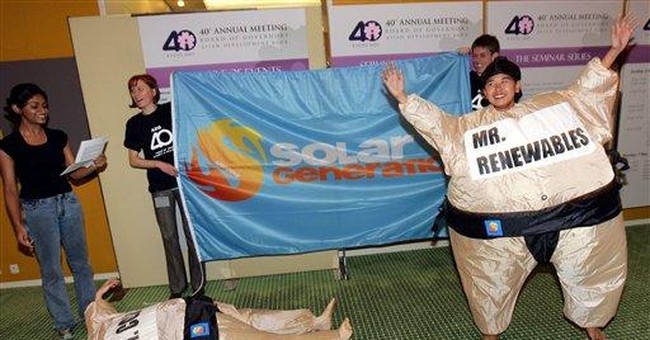 The congressional initiative to take coal and transform it into a liquid that serves to replace various fuels is going to have a hard time. Coalescing as fighting camps are (l) a public that says we have to devise a means of producing energy without dependence on the Persian Gulf, and (2) a public that says that the coal-based alternative being offered neglects the superordinate demands of our country and of our planet.

Now, narrowly measured, there is a problem that of course magnifies as the scale increases. It pays to remind ourselves that the conversion process was tested long ago. The Nazis used a coal-derived substance to fuel many of their submarines, and the South Africans used it to get around the boycott of oil we imposed against the apartheid regime.

What is now proposed is conversion on a huge scale. Many inducements are required to justify the capital expenditures needed to turn coal into liquid energy. One that catches the eye is the proposed purchase of 1 billion gallons of the new fuel by the Air Force, guaranteed for 25 years. Another proposal would have the government provide support to the first six coal-based plants if the price of oil should drop to less than $40 per barrel.

But for every inducement to go in that direction is a counterproposal to protect against the effects of burning the new fuel, releasing millions of tons of toxic effluents. The coal lobby insists that it has the research necessary to detoxify the new fuel, but the Green lobby is entirely skeptical of such protestations, and the fight goes on.

It isn't one that can be settled as easily as by doing nothing, because we need tons of fuel every day and the supply is limited. The problem is one not only of supply, but of access. Saudi Arabia has more than 260 billion barrels of proven oil reserves, which is not the same thing as to assume that its oil can be counted on to fulfill U.S. demands. The reasons are obvious. We are having a substantial problem maintaining some 146,000 troops in Iraq. We cannot reasonably count on tranquilizing the entire Gulf area for the requirements of our industry.

And the problem extends beyond even the diminishing supply of oil. The 2004 British Petroleum Statistical Review of World Energy gave the most optimistic projection in sight, predicting that global oil reserves will be entirely depleted by 2045 based on known reserves and current rates of consumption. By the same measure, U.S. reserves would be exhausted in 2015.

Seven years ago, writing in National Review, Peter Huber of the Manhattan Institute sought relief by introducing other perspectives. Most notable was the analyst Mark Mills', to the effect that "more than 80 percent of the growth in U.S. energy demand since 1990 has been met by electricity, which is the primary fuel of the information economy. The fuels we use to generate electricity itself are coal (52 percent), nuclear (19 percent), gas (15 percent) and hydroelectric (10 percent), and all are plentiful."

But of course the cultivation of more electricity requires very heavy hits on current law and public attitudes. The problem of conversion of coal to liquid fuel has counterparts in the generation of electricity by nuclear, gas and hydroelectric plants. The anti-nuclear lobby is the toughest Luddite entity in history. It has done everything short of rebuilding Hiroshima and Nagasaki to paralyze nuclear energy.

There are the calls for diminishing consumption. Most frequently heard about, because it is so manageable, is the proposed increase in taxes on gasoline. But here there is a concrete political problem, because some Americans would forgo their children before their car. You can coast along with a congressman who denies you nuclear energy, but if a gallon of gas were to rise to $10, Congress might be closed down.

We need great, human capitalized ingenuity. Politically, we need to discourage the heavy hand of government on progress. And this means not only the big government of Washington, which can deny us nuclear development, but the small governments here and there that write zoning laws that prevent drilling, or block refineries, or sequester outsized preservation areas.

The planet is ours, but the planet, for all that it gives us so much abundance, is closing in on the question of energy, so that before long we will need the sun and the wind to keep us mobile.