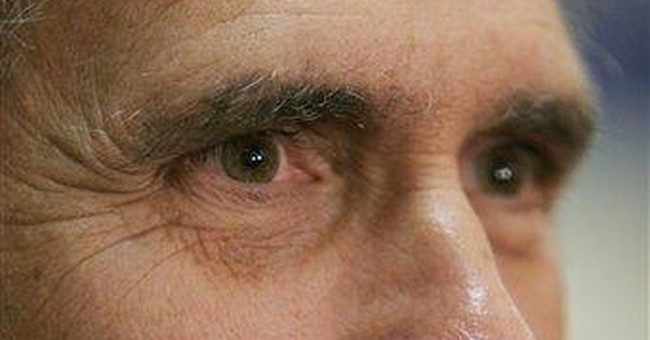 There is pretty outspoken derision, on the hustings, on the matter of Mitt Romney and his evolved stand on abortion. In Iowa, which Romney recently visited, a county chairman accosted a skeptic. What he said was that Romney's opposition to abortion was the result of a "thoughtful moral process." People on the other side, whether of Romney, or of abortion, are expressing their skepticism.

I recount, as relevant, a personal experience. In 1965, Vatican II released its paper affirming religious liberty and the rights of conscience of dissenting Christian communities. The following year, I wrote a column citing that Vatican paper as relevant to legislation about abortion pending in various states. Whether to approve abortion, I wrote, citing the Vatican document, was a moral question on which the Catholic Church could not dictate to non-Catholics.

I remember the dismay of Brent Bozell, my closest friend from college days and collaborator in the founding of National Review, of which I was the editor. What Bozell said was that abortion was, in the understanding of basic Christian thought, a fatal intervention in the life of a human being.

The moral narrative is plain enough, and what ensued in my own case was studied reflection on the point. The immunity of life has to begin at some moment after conception. It is nowhere assumed that the day-old child has less than a full, constitutional claim to protection. Yet if so, what protections are owing to a pre-born infant?

There are heavy books and treatises that argue the question, but after my own mind was made on protecting unborn life, I expressed my views not, I hope, tiresomely but with some frequency as the abortion question arose in the arena of American politics.

What I have found most arresting is the refusal of so many in the pro-choice army to submit the question to "thoughtful moral process," as we have been told Mitt Romney did. One can choose to ignore the moral question, but one cannot easily decline to acknowledge that there is a moral question underlying the dispute.

We need to remind ourselves that deep moral questions have at other times in American history engaged public thought. It is at least strange, but we need to remind ourselves of it, that many years after the founding of the Republic, it simply was not questioned that there existed a class of human beings who were slaves, and that it was a right of an American who bought such a creature at a public auction to direct that slave's life as one would a mule's.

We all know that slavery eventually became a fissiparous question that finally brought on a civil war. But what lingers in the mind is that perfectly good, kind, intelligent and well-read people accepted the institution, many without question, for years. If Thomas Jefferson could own slaves, where to find someone of higher sensibilities to rule that slave ownership was a grievous moral offense?

In other situations, with other perspectives, the question lingers. The civil rights debate of the 1960s put forward questions that demanded thoughtful moral consideration.

The Democratic Party attempted to prohibit thought on the question of abortion when at its convention in 1992 it declined to permit the Democratic governor of the state of Pennsylvania to give a speech -- because he opposed abortion, and the managers didn't want someone on stage who disturbed philosophical equanimity by raising the question of the unborn child.

Mitt Romney is hardly entitled to the Republican nomination just because he has confessed his doubts on the subject of abortion. But moral history is likely to bow its head to remark this sign of life of the moral conscience.

Republicans Know What's at the Heart of Nancy's Edict for Masks on the House Floor
Townhall
'Pro-terrorism must be the new WOKE': AOC referencing apartheid to trash Israel does NOT end well for her, like at all
Twitchy
Not Looking Good for Dems: Americans Deliver Brutally Honest Rejection of Kamala Harris
Redstate
CNN Mysteriously Drops Don Lemon's Show
PJ Media