Good news can be good 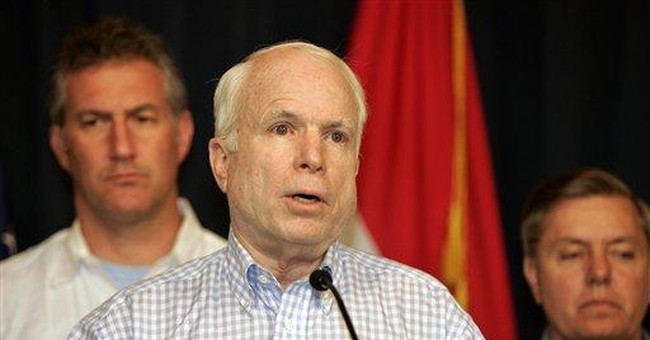 It's sad, the difficulty of saying anything about the Iraq venture that is other than apocalyptic. Sen. John McCain has problems, but focus on the recent event.

He was in Iraq on Sunday and reported that he had witnessed genuine progress. He touted his visit to the marketplace in Baghdad as evidence that the security program, Operation Fardh Al-Qanoon (Enforcing the Law), was working.

Now, Sen. McCain is a natural optimist. We do not know what he was saying the day before he was shot down over North Vietnam and taken prisoner, after which he was tortured for five years, writing an important chapter in America's history of valor. But for all that he had experienced the odium of the enemy at its worst, he was optimistic, in 2003, about the looming invasion of Iraq. Alongside most informed observers, he did not imagine that the insurgency would be able to withstand U.S. might and determination.

When he visited Iraq last week, he did not provide himself with elaborate security. He wore no helmet, and his bodyguards were routine. He saw the marketplace back in operation and reported to a news conference that in his view the situation was improving.

It is this that got him into trouble, but the point to raise is that optimistic reports on Iraq are simply rejected by critical quarters. There are people who seem to be saying that anything other than dire news about our cause there amounts to a ratification of the entire enterprise, plus also (one sometimes infers) a valentine to George W. Bush.

It does not seem to matter how specific the report, if it is optimistic. Consider Gen. David Petraeus on "The NewsHour With Jim Lehrer" on April 3. He was talking about the deadly Anbar province in western Iraq. "Some six or eight months ago," he said, "many were ready to write off (the province) as a lost cause." But today, "all of a sudden you have cities all the way from the border ... where tribes have volunteered (to join) the Iraqi security forces. In fact, in the latest recruiting effort, which used to draw minimal numbers of Iraqis willing to serve in the Iraqi army ... there were over 2,000 volunteers."

This is no less, said our general military commander in the region, "than a stunning development." It is owing, he explained, to the resentment by tribal leaders of the treatment they have received from al-Qaida. That treatment, by the enemy to whom so many Iraqis have deferred, "has really had a devastating effect, and they have said, 'No more,' and stood up and voted" with the patriots.

It is of course preposterous to assume that we have here a critical strategic turning point in the fortunes of the Iraqi enterprise. But one reflects on the Vietnam parallel. Toward the end of 1973 and into 1974, the South Vietnamese army was holding well against the communists. There were grounds for genuine strategic optimism, but supplies were needed, and could only be had from Washington.

But there, only a single concern governed political attention, and that was -- Watergate. President Nixon was for all intents and purposes immobilized, and Congress, dragged down by an executive sinking under the weight of vanity and stupidity, gave up on any effort to act on the news of the revitalization of the Saigon government. The United States did nothing -- and very soon suffered the consequence: a disastrous defeat.

The analogy today is to Congress' apparent indifference to the continuing demands of the Iraqi enterprise. In Vietnam, by 1973, there was near unanimity in regretting our involvement. As much might be said about Iraq today.

The effort to stabilize Iraq is making strides, if Gen. Petraeus is to be trusted. But one wonders how many politicians, looking at the next elections, can shake themselves free from Weltschmerz long enough to greet, with gratitude, the possibility that time, finally, is working in behalf of the great endeavor to maintain an element of freedom in that critical area of the Middle East.