John Edwards will give you Free Health 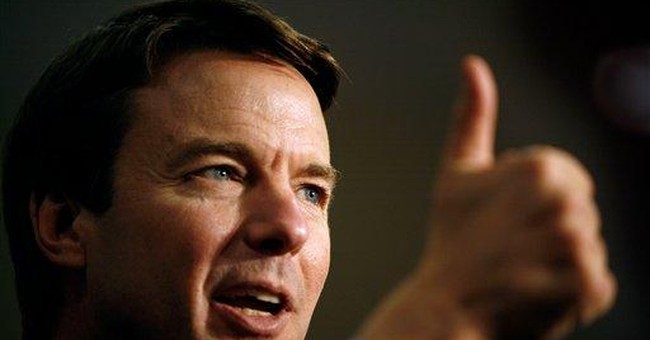 The word among professional Democrats is that John Edwards has set the stakes on the matter of health care, and no one who wants to be president can offer less than he is offering, which is -- of course -- guaranteed health. That is to say, guaranteed free health care.

Mr. Edwards' primary complaint is that 47 million Americans do not have health insurance. In a free society, one scans this datum in search of its component parts.

When a commodity is quantifiably measurable, yet universally available, like air, one can talk about its being "free". Only people in submarines need to measure air, and to pay the cost of supplying it. Health care, unlike air, can't be free, because doctors and nurses and drugs are not in infinite supply. So can we generate what amounts to a public subsidy by reducing the costs of health care?

To look that problem in the face, we search out relevant figures. One set of these reveals that the cost of health care for an American is twice what it is for a Western European. If in Germany it costs $100 per day per patient at a hospital, while a comparable hospital stay in the United States costs $200, one reaches for an explanation. Is it that American health care is twice as expensive because it is twice as comprehensive, twice as resourceful? Or is it simply that, for other reasons, doctors and nurses and drugs cost twice as much in the United States?

In any case, how do we go about reducing these costs? Either you pass a law that doctors and nurses and drug companies have to slash the cost of their services and products by one-half -- a proposal nowhere hinted at by Mr. Edwards -- or else we need to reduce the number of people entitled to receive that health service. How do you do that?

But John Edwards calls for something different -- a fiscal frumpery by which the cost of health care is somehow dissipated. This is done by obscuring the agent by which health care is provided. It has frequently been noticed by social philosophers that from about 1943, when income taxes were first collected so to speak at the source, via withholding, the average worker does not think of himself as being taxed -- because the instrument by which the money is taken is so automatic as to be more or less invisible. When an American worker is hired at $700 per week, he reckons his income not at $700, but at $500, which is the size of his paycheck.

Mr. Edwards speaks grandly about health coverage for 47 million people who do not now have it. But unless there is a diminution in the cost of health services, they will be paid for by somebody. If it is so that the 47 million without insurance are the identical 47 million who are the nation's poorest, then it might be said that all we are really engaging in is more redistribution. There is a case to be made for this, and indeed, redistribution has been accepted for years. The wealthiest 5 percent of Americans pay 54 percent of all taxes, which means they are paying taxes that would otherwise be paid by the 95 percent of Americans whose tax rates are lower.

Therefore, Mr. Edwards is doing nothing more than to call for increased taxes on the wealthy. They used to call that socialized medicine, when it was instituted by Great Britain after the war. It crossed the Atlantic into Canada, which is a tidy country in which to get sick, provided you can afford to travel across the border to an American doctor.