Politics for a billion 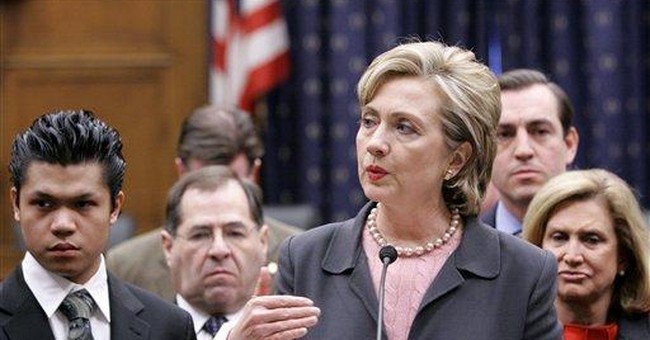 The round number is now $500 million. Five hundred million dollars is what each major party's presidential nominee is expected to spend between now and Nov. 4, 2008. Today's story focuses on Hillary Clinton's decision not to accept public campaign financing.

The analyst quickly explains everything about Hillary's decision except what one would be most interested in hearing. Her camp explains the competitive situation: If she lay back and accepted the federal spending plan, her spending in the primaries would be capped at $150 million. But what of the competitors? Suppose Barack Obama sailed past that figure and just kept on spending, leaving Hillary stranded with the impecuniosity she had wished on herself?

And then there is the more general picture. Eight Democrats have so far declared for the presidency, and the primacy of Hillary's standing might well depend on her being able to match or, she would hope, supersede the spending of lesser claimants on the White House she knows so well.

But here, surely, is the unexplored question: What's in it for the donors? They're good for $500 million in the next 22 months, which comes to three-quarters of a million dollars per day. And that's just the picture for Hillary or whoever else winds up being the Democratic nominee.

There are eight people in the race. Obviously, some of these candidates will be dropped by the donors as they fall behind in the polls. But the question persists: Who are these donors, why are they there, and what do they expect in return?

A British observer recently commented that just as the Brits like to bet on everything, so do the Americans, and therefore we should not be surprised by the large numbers. But of course the difference is manifest. When a Brit bets -- and indeed they bet on everything -- the rewards of success are as immediate and liquid as at Las Vegas.

But to put up a large stake on a political candidate isn't an economic transaction except in such cases as would make that investment illegal. If you contribute to a candidate who will be signing your or a competitor's state contract to replace telephone poles, you may be engaging in attempted bribery. The trick in such cases is to justify your contribution on the grounds that the political philosophy of your candidate tilts him, should he be successful in his political race, to that special concern for the national welfare which calls for a concentrated use of your brand of telephone pole.

It is dismaying to those who have sought so earnestly to slightly remove politics from money that the upward spiral continues. In 2000, George W. Bush spent $186 million to complete his campaign for president. In 1980, Ronald Reagan spent $29 million. What is the hypothetical high figure we are headed for? And what are the implications of campaigns of that economic cost?

Some years ago, contemplating whether to make another run for office, Jack Kemp said to a friend that his decision was finally made when he was told by his bookkeeper that he would need to raise $35,000 every day between New Year's and Election Day. He decided to quit politics.

That is the story at the other end. We need to worry about financial contributors to political races and what their effect is on people who run for office. But we need also to worry about candidates who are discouraged from attempting to serve by the bumpiness of the prospective road ahead. It is many things, going out to raise campaign money. It is boring, repetitious, humiliating and demoralizing. There are men and women brave enough and patriotic enough to endure the preliminaries, but there are also the Jack Kemps who, after a long run of it, decide to quit.

The market has a role in it all, necessarily. If donors allocate $500 million to encourage one person's political venture, they have to see that there is something in it for them. For their country ... sure. But disembodied political philanthropy is usually the kind that comes in the form of $20 bills sent to the candidate. Five-thousand-dollar donations usually have in mind the matter of new telephone poles.