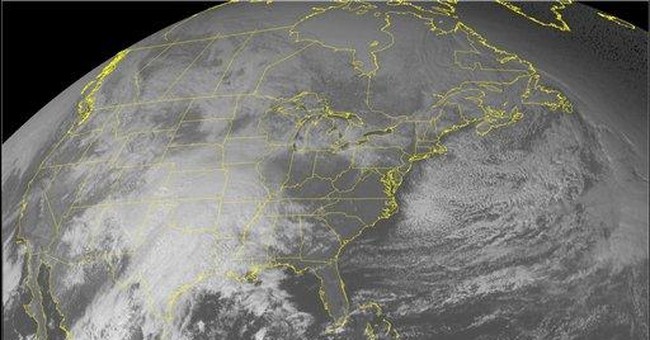 In August, President Bush approved a new U.S. policy on space exploration and on the military and commercial uses of space. The White House announced that the United States would not agree to any arrangements that would restrict our own ventures into space.

This was not surprising. We spoke as the superpower that had left behind, but not immobilized, what was once the other superpower, the Soviet Union. Russia acknowledges no bounds on its strategic intentions in space, but Russia is more worried right now about cornflakes at breakfast than about the old indulgences of superpowers.

What was important in the White House document, released in October, was less the announcement that we would continue energetic uses of space than the accompanying announcement that other nations' activities must be restricted. Specifically, the White House affirmed that the United States would "dissuade or deter others from either impeding (U.S.) rights or developing capabilities intended to do so." In fact, we would "deny, if necessary, adversaries the use of space capabilities hostile to U.S. national interests."

And of course today's headline is that Communist China has soared into space. What it accomplished, concretely, was to reach with a land-based missile an old and expendable Chinese weather satellite and blow it to smithereens -- literally: There are 300,000 bits of it cavorting in space, which will take a quarter century to clean up. We know this figure pretty exactly, because it took 17 years to dissipate the debris from our own test in 1985. And orbiting debris was one of the dangers specifically addressed in the Bush administration's new policy.

Two parts of the story attract attention. The first is that we were taken by surprise. It is embarrassing to proclaim, in October, that the United States will "dissuade" any power that seeks military leverage in space, and then to confront, in January, evidence that exactly what we set out to prevent has happened. Why was it beyond U.S. intelligence to foresee Chinese progress along these lines? And if it is deducible from street knowledge of Chinese ambitions, prowess and technological savoir-faire that China was likely to develop the capability of projecting a missile 500 miles into space, why did President Bush expose himself, and the United States, to charges of arrogance, and then impotence?

There are two views of Communist China not entirely inconsistent. The first, and most popular, is that the term "Communist," vis-a-vis modern China, is as accurate as "Democratic Republic" was to describe East Germany during the Cold War. No one questions that there are Marxist theologians in the hierarchy and monks in the civil ranks and in the military. But it is practically nowhere supposed that the old Communist afflatus governs important elements of Chinese policy. China is not now a major imperialist threat to Southeast Asia, let alone a challenger to Japan or Russia.

But the question of Taiwan transcends ideological rigidities. The Communist Chinese are unswervable in their determination to reacquire Taiwan. It was not very long ago that China actually threatened military operations. And there is no doubting that but for the United States, these would have eventuated. The U.S. 7th Fleet has served as a cordon sanitaire, but it isn't only the naval arm that has kept Taiwan safe. It is actually written into U.S. policy that we will guarantee the freedom of Taiwan, so that the entire apparatus of U.S. might is committed to denying China a bloody re-annexation of its lusty and prosperous former province.

In military terms, what the Chinese have established is that they intend to develop weaponry which would deny to the United States automatic dominance in space -- with all that that would imply in a contest over the fate of Taiwan.

The United States is still far ahead of China. But the big guy on the block has lost an important advantage.