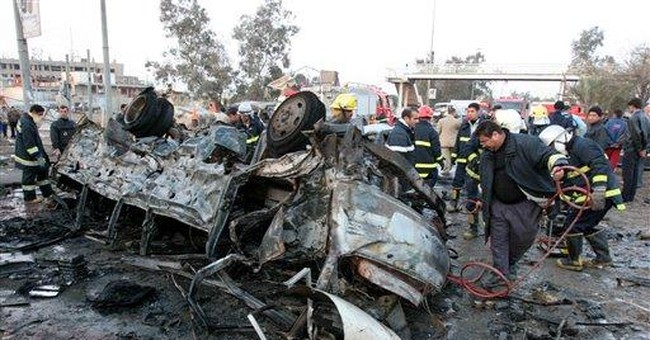 House Speaker Nancy Pelosi's comments raise a point worth making. It is that, in the last analysis, there is no way for Congress to estop military escalation by the executive except by cutting funds. Or impeaching the president.

Some speak of alternative measures -- specifically, a "nonbinding" resolution that would express the will of Congress in the matter of financing an additional 20,000 troops, but would stop short of declaring the expenditure of federal money for that purpose an illegal act.

Some legislators are aware that Congress is flirting with a constitutional problem of its own. It has the authority to raise and dispose of funds. But the president exercises authority as commander in chief. Professor Walter Dellinger, who was President Clinton's chief constitutional authority, put it well when he wrote that "broad as Congress' spending power undoubtedly is, it is clear that Congress may not deploy it to accomplish unconstitutional ends" -- such as restricting the president's authority as commander in chief to direct the movement of American troops.

Dellinger quoted FDR's attorney general, Robert Jackson, who later served as a Supreme Court Justice: "The president's responsibility as commander in chief embraces the authority to command and direct the armed forces in their immediate movements and operations, designed to protect the security and effectuate the defense of the United States."

It is simply preposterous to assume that Congress is going to specify a single escalation of troop levels in Iraq as transgressing against congressional authority.

Sen. Christopher Dodd, D-Conn., has an interesting suggestion on how to avoid the dilemma. He would back a resolution declaring that additional troops could not be sent into that theater except with the sanction of Congress. It becomes a sophisticated question whether Congress can simultaneously abide by the separation of powers and intrude into military operations the commander in chief deems necessary to the exercise of his duties.

The vice president's office, meanwhile, has said that there is already in the executive kitty enough money to finance the proposed augmentation of troops. Once again we get into disputes extremely difficult to adjudicate. It is unlikely that any constitutional force in the imagination of any congressman is going to interfere with the deployment of five brigades in the midst of a lengthy military venture.

Is it a venture backed by the American people? No one doubts that, at the inception, going into Iraq was a popular move. But the point being raised is that the American people, including many members of Congress, were propelled by an understanding of the Iraqi situation that was simply false. We all acknowledge now that there were no weapons of mass destruction within Iraq's borders, though it is a different question whether deceit was a part of the executive act. A brief to the effect that Bush and his team should have known that there were no WMDs in Iraq would probably carry the day in a public examination of the scene as of March 2003. And there is no question that whatever the voters had in mind when the war began, they are now anxious to end it.

Mr. Bush will place his 20,000 troops in Iraq athwart the objections of Pelosi et al. Give the situation six months to crystallize. If at that point Iraq appears to be stabilizing, Mr. Bush will succeed in hanging on. There is legitimate optimism on the point. Some of the chaotic fury of the insurgents seems to be dissipating. The Maliki government appears to appeal to many young Iraqis in pursuit of a stability preferable to the desperate alternative.

Whether the American troops can play a critical role in encouraging forces of moderation can't be foretold. But what is not going to happen is a situation where U.S. Army paymasters find that the checks they give out are going to bounce. Mrs. Pelosi is spoiling for a fight, but she knows she will not win with a call for divesting American soldiers of gunpowder.

A rise in Iraqi competence would hardly be surprising. At this point, they can't carry off a successful execution. It is simply unlikely that the faint of heart in Congress are going to frustrate the attempt to encourage an orderly mobilization of Iraqi civil society. Congress is unlikely to feel critical popular pressure to abandon reasonable hope.