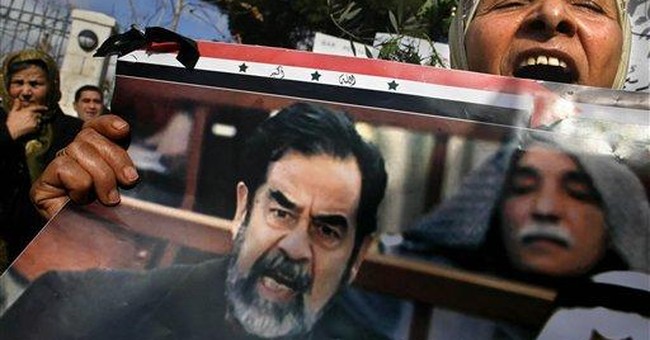 We haven't yet had, in the West, a true crystallization of opinion on the matter of (a) what can be shown on TV news, or (b) what the public should be allowed to see via other media. Divisions on these questions were very clear following the execution of Saddam Hussein.

There was some confusion traceable to eclectic authority. Saddam was physically imprisoned under the jurisdiction of the U.S. Army, but he was tried by an Iraqi court, in a courtroom made possible by U.S. caretakers. When the time for the end came, the United States delivered Saddam to the execution site, which was under overall U.S. control. But he was delivered into the hands of Iraqi judges and executioners.

Here the question of authority got confused. The United States, as a general proposition, does not permit moving pictures of death scenes. Sometimes these are taken for the record, but not for public exhibition. Some of the photos taken of the medical proceedings after the shooting of President Kennedy have not yet been released. The delicate question has to do with prurience. Do we wish to make possible the gratification of that sense, quite overt in some people -- e.g., the tricoteuses during the French Revolution, who went early to make certain to get seats for the morning's decapitations.

There is, then, a class of people who would keep their eyes open even if they knew that what was coming up on the screen was the neck-breaking of Saddam Hussein. At the opposite end of the scale are those who so deplore the spectacle that they are willing to pass laws criminalizing the exhibition, and here and there have succeeded in doing so.

We run into a conflict in priorities. There are always those who believe that there should be no censorship of any public event. People who hold to that view were supported for a very long time by moralists who believed that public exposure of the wages of sin would diminish the incidence of sin. The anomaly was famously exposed when, in Great Britain, capital-punishment abolitionists drove home the point that hanging 10-year-olds for stealing something worth sixpence had no apparent effect on the frequency of larceny. Gradually, capital punishment was moved to behind closed doors, though right up to the eve of World War II, beheadings in France were done publicly.

The ambivalence is heightened by the aggressive growth in the technology that tends to reveal all. It may be that the journalistic infrastructure aims less at revelation in the spirit of free speech than at satisfying appetites that we would like to think civilization would succeed in frustrating.

But there it is: In a matter of hours, one would learn that tuning in to any of a half-dozen Web sites would yield very nearly a clinically complete version of what happened to Saddam Hussein in the two minutes after the noose was strung about his neck. It is technically possible to screen everyone admitted to a death chamber in order to locate and embargo cameras, but as we have vividly seen over the weekend, even when such cameras are prohibited, the likelihood that they will be kept from the scene is slight.

So that we face again the question we faced for so many years awaiting the consolidation of the taboo: What are we going to do now? And to what extent is U.S. resolve in the matter the decisive factor? There is not a hint in Iraq of any prosecutorial appetite to track down the spectators who took the pictures of Saddam and peddled them with utter ease to the great brokers of modern news, the Internet custodians.

Perhaps the public question will simply yield to practical imperatives. We are not going to instruct the nations of the Mideast in our protocols about viewing executions. To begin with, we aren't even going to instruct them on whether capital punishment will be tolerated. Public pressures tend to dictate the answers to major questions, as when the government of Israel made an exception for Nazis when constructing its law against capital punishment, so that there was no impediment, a few years down the line, to Israel's hanging of Adolf Eichmann.

We have many problems in Iraq, to which we would not wish to add a regulation forbidding the execution of tyrants. An obeisance of sorts was paid to the old tradition by the major networks. They simply didn't film the neck-breaking. They looked to one side, and probably saw it at home.