Walter E. Williams
|
Posted: Sep 14, 2016 12:01 AM
Share   Tweet
The opinions expressed by columnists are their own and do not necessarily represent the views of Townhall.com. 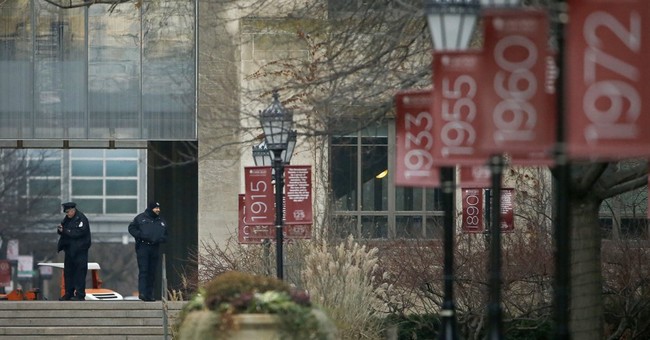 The University of Chicago's president, Dr. Robert J. Zimmer, wrote a Wall Street Journal article, titled "Free Speech Is the Basis of a True Education." In it, he wrote: "Free speech is at risk at the very institution where it should be assured: the university. Invited speakers are disinvited because a segment of a university community deems them offensive, while other orators are shouted down for similar reasons. Demands are made to eliminate readings that might make some students uncomfortable. Individuals are forced to apologize for expressing views that conflict with prevailing perceptions. In many cases, these efforts have been supported by university administrators."

Sharing the president's vision, the University of Chicago's dean of students, John Ellison, sent a letter to freshmen students that read, in part: "Our commitment to academic freedom means that we do not support so-called 'trigger warnings,' we do not cancel invited speakers because their topics might prove controversial, and we do not condone the creation of intellectual 'safe spaces' where individuals can retreat from ideas and perspectives at odds with their own."

Those are hardly the sentiments of dishonest and spineless administrators at other colleges. At DePaul University, a visit by conservative journalist Milo Yiannopoulos was disrupted by student activists. School security refused to restore order and later banned Yiannopoulos from returning. Conservative Ben Shapiro was invited by Young America's Foundation to California State University, Los Angeles to deliver a speech titled "When Diversity Becomes a Problem." University President William Covino wrote an email that read, "After careful consideration, I have decided that it will be best for our campus community if we reschedule Ben Shapiro's appearance for a later date, so that we can arrange for him to appear as part of a group of speakers with differing viewpoints on diversity. Such an event will better represent our university's dedication to the free exchange of ideas." But note that the university invited leftists such as Cornel West, Angela Davis and Tim Wise without feeling a need for differing viewpoints.

Sociologist Barry Glassner is the president of Lewis & Clark College. Morton Schapiro is the president of and a professor of economics at Northwestern University. Schapiro wrote in The Washington Post: "I'm an economist, not a sociologist or psychologist, but those experts tell me that students don't fully embrace uncomfortable learning unless they are themselves comfortable. Safe spaces provide that comfort." Both presidents, in a Los Angeles Times op-ed, said campus protests are a "sign of progress" toward diversity and inclusion and are "noble" methods of change, as opposed to the opining of "pundits and politicians ... from gated communities and segregated offices." They added, "Students are coming of age in a time of political, social and economic turbulence unseen in a generation."

Many college administrators have generalized contempt for American values. Here's just a bit of the evidence. A reporter from Project Veritas covertly recorded an administrator at Vassar College following through on her request to shred the Constitution. Carol Lasser, professor of history and director of gender, sexuality and feminist studies at Oberlin College, said that "the Constitution is an oppressive document" because it intentionally makes change a slow process. Wendy Kozol, chair of comparative American studies at Oberlin, agreed, saying "the Constitution in everyday life causes people pain" and adding that she rarely discusses the Constitution in class and that when she does, she tends to focus on specific amendments.

The University of Michigan and Case Western Reserve University have announced safe spaces to protect students from unwelcome opinions. University of California, Santa Barbara students want trigger warnings for all classes and the right to be excused from any lessons that might "trigger" them.

The courage shown by University of Chicago administrators is relatively rare. The academic tyranny seen on many college campuses reflects a dereliction of duty by those who are charged with the ultimate control -- the boards of trustees. Trustees have the power to fire a president and his key administrators for yielding to campus tyrants. College administrators buy into today's nonsense because they lack backbone and are cowards. Worse yet, they may see merit in safe spaces, trigger warnings and student disruption of speakers with uncomfortable ideas.