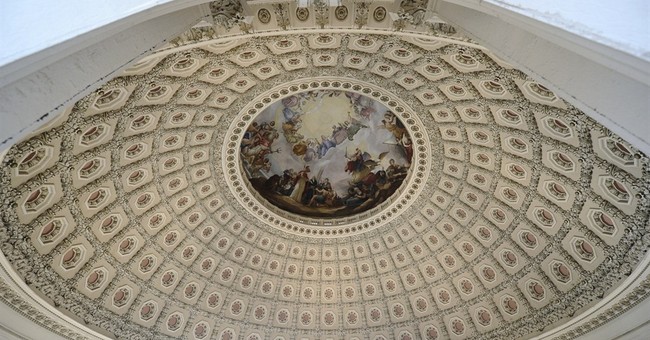 Here's a question that I've asked in the past that needs to be revisited. Unless one wishes to obfuscate, it has a simple yes or no answer. If one group of people prefers strong government control and management of people's lives while another group prefers liberty and desires to be left alone, should they be required to enter into conflict with one another and risk bloodshed and loss of life in order to impose their preferences on the other group? Yes or no. My answer is no; they should be able to peaceably part company and go their separate ways.

The problem our nation faces is very much like a marriage in which one partner has an established pattern of ignoring and breaking the marital vows. Moreover, the offending partner has no intention to mend his ways. Of course, the marriage can remain intact while one party tries to impose his will on the other and engages in the deviousness of one-upsmanship and retaliation. Rather than domination or submission by one party, or domestic violence, a more peaceable alternative is separation.

I believe our nation is at a point where there are enough irreconcilable differences between those Americans who want to control other Americans and those Americans who want to be left alone that separation is the only peaceable alternative. Just as in a marriage where vows are broken, our rights guaranteed by the U.S. Constitution have been grossly violated by a government instituted to protect them. These constitutional violations have increased independent of whether there's been a Democrat-controlled Washington or a Republican-controlled Washington.

Article I, Section 8 of our Constitution lists the activities for which Congress is authorized to tax and spend. Nowhere on that list is there authority for Congress to tax and spend for: Medicare, Social Security, public education, farm subsidies, bank and business bailouts, food stamps and thousands of other activities that account for roughly two-thirds of the federal budget. Neither is there authority for congressional mandates to citizens about what type of health insurance they must purchase, how states and people may use their land, the speed at which they can drive, whether a library has wheelchair ramps, and the gallons of water used per toilet flush. The list of congressional violations of both the letter and spirit of the Constitution is virtually without end. Our derelict Supreme Court has given Congress sanction to do just about anything for which they can muster a majority vote.

James Madison, the acknowledged father of the Constitution, explained in Federalist Paper No. 45: "The powers delegated by the proposed Constitution to the federal government are few and defined. Those which are to remain in the State governments are numerous and indefinite. The former will be exercised principally on external objects, as war, peace, negotiation, and foreign commerce. ... The powers reserved to the several States will extend to all the objects which in the ordinary course of affairs, concern the lives and liberties, and properties of the people, and the internal order, improvement and prosperity of the State." Our founder's constitutional vision of limited federal government has been consigned to the dustbin of history.

Americans have several options. We can like sheep submit to those who have contempt for liberty and our Constitution. We can resist, fight and risk bloodshed and death in an attempt to force America's tyrants to respect our liberties and Constitution. A superior alternative is to find a way to peaceably separate into states whose citizens respect liberty and the Constitution. My personal preference is a restoration of the constitutional values of limited government that made us a great nation.