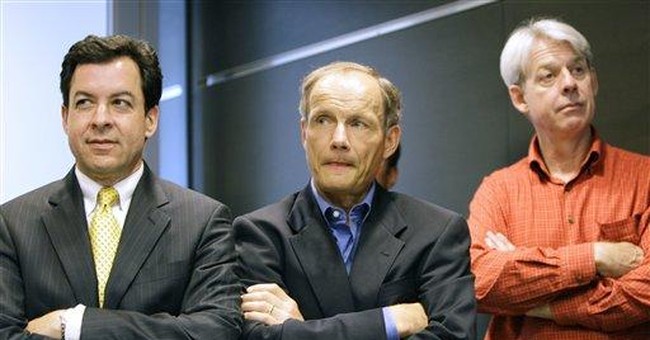 One of the unappreciated casualties of the War of 1861, erroneously called a Civil War, was its contribution to the erosion of constitutional guarantees of state sovereignty. It settled the issue of secession, making it possible for the federal government to increasingly run roughshod over Ninth and 10th Amendment guarantees. A civil war, by the way, is a struggle where two or more parties try to take over the central government. Confederate President Jefferson Davis no more wanted to take over Washington, D.C., than George Washington wanted to take over London. Both wars are more properly described as wars of independence.

Oklahomans are trying to recover some of their lost state sovereignty by House Joint Resolution 1089, introduced by State Rep. Charles Key.

Key's resolution passed in the Oklahoma House of Representatives with a 92 to 3 vote, but it reached a bottleneck in the Senate where it languished until adjournment. However, Key plans to reintroduce the measure when the legislature reconvenes.

Federal usurpation goes beyond anything the Constitution's framers would have imagined. James Madison, explaining the constitution, in Federalist Paper 45, said, "The powers delegated … to the federal government are few and defined. Those which are to remain in the State governments are numerous and indefinite. The former will be exercised principally on external objects, [such] as war, peace, negotiation, and foreign commerce. … The powers reserved to the several States will extend to all the objects which, in the ordinary course of affairs, concern the lives, liberties, and properties of the people." Thomas Jefferson emphasized that the states are not "subordinate" to the national government, but rather the two are "coordinate departments of one simple and integral whole. … The one is the domestic, the other the foreign branch of the same government."

Both parties and all branches of the federal government have made a mockery of the checks and balances, separation of powers and the republican form of government envisioned by the founders. One of the more disgusting sights for me to is to watch a president, congressman or federal judge take an oath to uphold and defend the United States Constitution, when in reality they either hold constitutional principles in contempt or they are ignorant of those principles.

State efforts, such as Oklahoma's, create a glimmer of hope that one day Americans and their elected representatives will realize that the federal government is the creation of the states. A bit of rebellion by officials in other states will speed that process along.