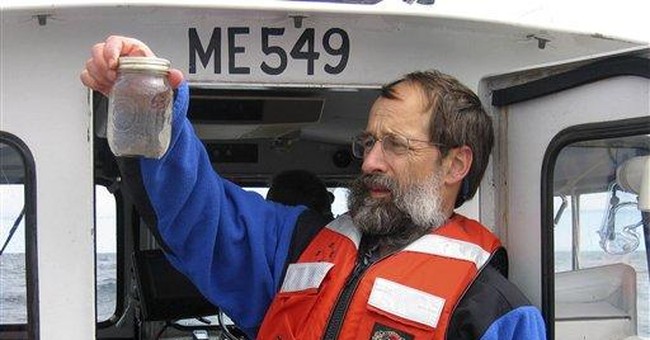 Global warming has become a big-ticket item in the eyes of its supporters. At stake are research funds, jobs and the ability to control lives all over the globe. Most climatologists agree that over the last century, the Earth's average temperature has risen about one degree Celsius.

The controversy centers around the source of the temperature change -- man-made or natural causes. Global warming alarmists hold the view that it's man-made emissions of CO2 that's driving climate change, and they seek to suppress any dissent suggesting other causes.

According to the July 16 Washington Times, Michael T. Eckhart, president of the American Council on Renewable Energy (ACORE), sent a threatening missive to Marlo Lewis, senior fellow at the Washington, D.C.-based Competitive Enterprise Institute, which read: "Take this warning from me, Marlo. It is my intention to destroy your career as a liar. If you produce one more editorial against climate change, I will launch a campaign against your professional integrity. I will call you a liar and charlatan to the Harvard community of which you and I are members. I will call you out as a man who has been bought by Corporate America. Go ahead, guy. Take me on."

The Environmental Protection Agency, Department of Agriculture, Department of Commerce and the Department of Energy are all members of ACORE. Sen. James Inhofe, R-Okla., ranking member of the Environment and Public Works Committee, held hearings on the matter. Following the hearings, the senator sent letters to the agencies asking them to "reconsider their membership in ACORE."

Speaking at the American leg of Live Earth: The Concerts for a Climate in Crisis, Robert F. Kennedy Jr., the son of the late Robert F. Kennedy, said, "Get rid of all these rotten politicians that we have in Washington, who are nothing more than corporate toadies." Referring to skeptics of man-made global warming, he said, "This is treason. And we need to start treating them as traitors." Traitors are either shot or imprisoned. I wonder which Robert Kennedy has in mind for the skeptics.

University of Oregon's George Taylor holds the title of state climatologist. Oregon Gov. Ted Kulongoski wants to take that title from Taylor. The governor said Taylor's skepticism interferes with Oregon's stated goals to reduce greenhouse gases, the accepted cause of global warming in the eyes of a vast majority of scientists.

Earlier this year, the Weather Channel's Dr. Heidi Cullen called for the decertification of weathermen who were skeptical of man made global warming. Grist Magazine's staff writer David Roberts said that his solution for the "bastards" who were members of what he termed the global warming "denial industry" is, "When we've finally gotten serious about global warming, when the impacts are really hitting us and we're in a full worldwide scramble to minimize the damage, we should have war crimes trials for these bastards -- some sort of climate Nuremberg."

"Global warming driven by greenhouse gas pollution (but ultimately by greed, racism and lying) is killing our Planet," says an article in Media With Conscience. It goes on to say, "Our Planet, the Earth -- is under acute threat from Climate Criminals threatening the Third World with Climate Genocide and the Biosphere with Terracide (the killing of our Planet)." Sen. Inhofe maintains a website citing these and other many examples of attacks on skeptics of manmade global warming. (See here) See here)