Victor Davis Hanson
|
Posted: Jan 04, 2018 12:01 AM
Share   Tweet
The opinions expressed by columnists are their own and do not necessarily represent the views of Townhall.com. 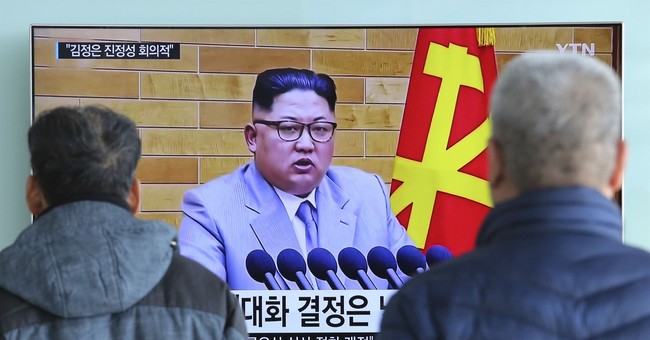 For good or evil, we may see radical changes in North Korea in 2018.

The beefed-up United Nations sanctions by midyear could lead to widespread North Korean hunger, as well as the virtual end of the country's industry and transportation.

In the past, the West had called off such existential sanctions and rushed in cash and humanitarian aid on news of growing starvation. Would it now if the bleak alternative was a lunatic's nuclear missile possibly striking San Diego or Seattle?

To survive an unending trade embargo -- and perhaps to avoid a coup -- Kim Jong Un would likely either have to recalibrate his nuclear program or consider using it.

China has always been unwilling to give up pit bull North Korea as its client. The Kim dynasty has proved especially useful over the past 30 years for aggravating and distracting the Chinese communist government's archenemy, Japan, and its chief rival, the United States.

Yet China is now worried that the Donald Trump administration is as unfathomable as the prior Obama administration's strategic patience doctrine was predictable.

Beijing's sponsorship of the rogue nuclear regime in North Korea could increasingly become bad business, given global anxieties over the many possible trajectories of North Korea nuclear missiles.

What are some likely scenarios for 2018?

1) The status quo. China may loudly proclaim that it is following U.N. commercial sanctions while it secretly offers just enough sanction-busting aid to keep Kim Jong Un afloat. It might use its leverage to force Kim to cool his nuclear rhetoric -- even as it stealthily supplies embargoed fuel and food.

China would then hope that an amnesiac world would move on and accept a gentler-sounding (but still nuclear and thus useful) North Korea.

The status quo -- North Korean missiles pointed at America's West Coast -- is clearly untenable. Yet never underestimate China's faith in the therapeutic forces of Western appeasement to accept the unacceptable.

2) A Chinese solution. China would cut some sort of deal to remove North Korean missiles -- or even the Kim regime itself through a coup or uprising -- in exchange for controlling the future of North Korea. That would likely mean not allowing a democratic, free, Westernized and unified Korean peninsula on its borders.

Other than disassociating itself from the future status of North Korea, the U.S. should ensure that it does not give any concessions to China to remove the nukes. Such an indulgence would only reward North Korea nuclear roguery and ensure that the cycle of the last three decades would be endlessly repeated.

3) Forced removal. Barring acceptance of the status quo or a Chinese solution, the U.S. would be forced to accept widespread malnutrition of the North Korean populace and a constant ratcheting up of pressures to eliminate Pyongyang's nuclear weapons.

Such leverage might include radical bilateral trade sanctions against China. The Japanese, Taiwanese and South Korean militaries could threaten to go nuclear.

The U.S. should sponsor a Manhattan Project-style regional comprehensive missile defense system. It could also ban Chinese Communist Party officials and their families from U.S. soil.

Such pressures might force something quite unpredictable to happen.

A doomed North Korea could launch a missile, invade South Korea, be forced to disarm, or disintegrate amid coups or popular uprisings. A humiliated China would likely either be pressed to quietly abandon North Korea or find financial, economic and military ways to harm the U.S.

4) Preemption. Barring the "peaceful" options of defanging nuclear North Korea, the U.S. and its Japanese and South Korean allies would have to disable the missiles through military force.

Such a nightmarish action would not be limited to "surgical strikes." Instead, it would have to include massive attacks on North Korean missile sites, command and control centers, artillery and missile platforms, military bases and WMD repositories.

Such preemption would quickly escalate to a general-theater war -- or worse.

A tottering North Korea could order a full-fledged artillery pounding of Seoul, chemical and cyber attacks, and a conventional ground invasion of South Korea.

The U.S. and its allies would win such a war. But the cost could be catastrophic and prompt global recession.

No one knows what China would do in such an exigency. Would it merely cry crocodile tears while its troublesome patron disappeared? Or to save its last communist client, would China send troops into the peninsula as it did in the fall of 1950?

One thing is always certain. The naive architects of appeasement who watch as monsters grow always win short-term praise for avoiding immediate war. Their realist successors, who are forced to cage or destroy such full-grown beasts, are usually labeled as war mongers.

House Republicans to FISA court: When will you penalize attorneys who misled you on Carter Page warrants?
Hotair
'Liberal Hacks': Ted Cruz Dropkicks Chris Cuomo After His Nasty Attack Against Martha McSally
Redstate