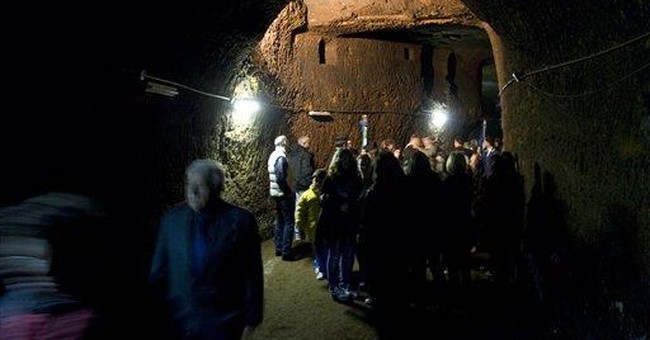 Sixty-five years ago, on April 1, 1945, the United States Marines, Army and Navy invaded Okinawa. The ensuing three months of combat resulted in the complete defeat and near destruction of imperial Japanese forces on the island just 340 miles from the mainland.

The victory proved the most costly American campaign in the Pacific. Some 50,000 Americans were killed, missing or wounded. The incredible carnage would help persuade the American government to drop atomic bombs on Hiroshima and Nagasaki, in hopes of avoiding an even more horrific invasion of the mainland.

Okinawa and the war in the Pacific are back in the news these days with the airing of a 10-part HBO series, "The Pacific" -- a companion story to the 2001 series "Band of Brothers" about the American advance from Normandy across the Rhine into Germany.

But recently in hyping "The Pacific's" upcoming airing, the actor Tom Hanks, co-producer of the fine new HBO series, made some unfortunate -- and ahistorical -- remarks.

"Back in World War II," Hanks said, "we viewed the Japanese as 'yellow, slant-eyed dogs' that believed in different gods. They were out to kill us because our way of living was different. We, in turn, wanted to annihilate them because they were different."

Yet the Pacific war was about far more than being "different."

Indeed, before and after the war, race was not a determining factor in American and Japanese relations. The two nations in World War I were partners against the Germans and Austrians. And during World War II itself, we joined Chinese, Koreans, Filipinos and other Asians to stop Japanese aggression -- often fueled by its own particular notion of Japanese racial superiority. In the aftermath of World War II, the Americans helped rebuild Japan, and once more were allied with it against the communist Soviet Union.

And despite the deplorable internment of Japanese nationals and American citizens of Japanese descent during the war, racial difference still does not in itself account for the horror in the Pacific -- or why we were there in the first place.

We entered the war, of course, because of the surprise attack on Pearl Harbor -- which angered Americans even more than Hitler's aggression in Europe. Nazi barbarity for over two years had still not provoked the United States to enter the war -- given that none of our own territory had been attacked, much less in surprise fashion at a time of peace.

Conditions on the battlefield in the Pacific most certainly account for the horror of the war there.

For starters, Japanese militarists had updated the old samurai code of Bushido and grafted it to a modern industrial military dictatorship -- brainwashing millions into thinking individual surrender on the battlefield was tantamount to national disgrace. Italian and even fanatical German forces might give up when surrounded. In contrast, campaigns in the Pacific ended only when the vast majority of Japanese soldiers were killed or severely wounded

Logistics for the American force were also strained, given the vast distances across the Pacific. Tropical diseases were like nothing encountered in Europe. While most Americans had heard of Sicily, Italy and France, most did not know what -- much less where -- a distant Guadalcanal, Peleliu or Iwo Jima was.

The invasion fleet off Normandy Beach did not have to worry about airborne Nazi suicide bombers -- in the manner that Kamikaze attacks off Okinawa killed thousands of American seamen.

American tactical bombing, massive artillery barrages and armor thrusts were often less successful in the Pacific than in Europe, given the dense jungle, rough terrain and nature of island fighting.

The result was often that combat was reduced to hand-to-hand and small-arms fighting between U.S. Marines and crack Japanese imperial troops, hardened from brutal service of a prior decade in China.

Given all these obstacles, it now seems incredible that an America that was half-armed in 1941 defeated Japan and utterly destroyed the idea of Japanese militarism in less than four years -- a feat attributable in large part to the amazing courage and expertise of American soldiers.

The war in the Pacific was not about racism or because Japanese "were different," much less because two nations had equally justifiable grievances against each other.

Instead, the brutal Pacific war was about ending an expansionary Japanese fascism that sought to destroy all democratic obstacles in its path. And we are indebted today to the relatively few Americans who once stopped it in horrific places like Okinawa -- some 65 years ago this week.