What If Iraq Works? 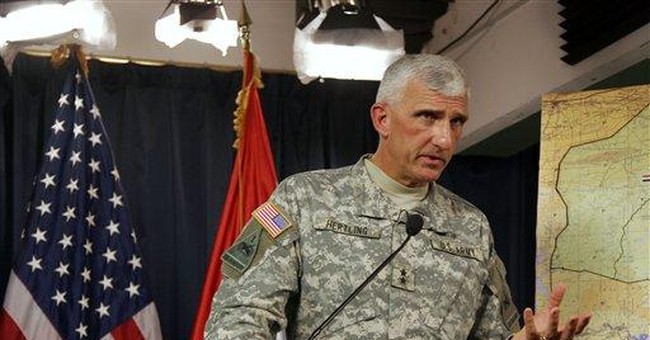 There is a growing confidence among officers, diplomats and politicians that a constitutional Iraq is going to make it. We don't hear much anymore of trisecting the country, much less pulling all American troops out in defeat.

Critics of the war now argue that a victory in Iraq was not worth the costs,

not that victory was always impossible. The worst terrorist leaders, like Abu Musab al-Zarqawi and Muqtada al-Sadr, are either dead or in hiding.

The 2007 surge, the Anbar Awakening of tribal sheiks against al-Qaida, the change to counterinsurgency tactics, the vast increase in the size and competence of the Iraqi Security Forces, the sheer number of enemy jihadists killed between 2003-8, the unexpected political savvy of Prime Minister Nouri al-Maliki and the magnetic leadership of Gen. David Petraeus have all contributed to a radically improved Iraq.

nominee Barack Obama -- are readjusting their positions to reflect the new undeniable realities on the ground in Iraq:

The additional five combat brigades of the surge sent to Iraq in 2007 are already redeployed out of the country. American soldiers are incrementally turning province after province over to the Iraqi Security Forces, and planning careful but steady withdrawals for 2009.

Violence is way down. American military fatalities in Iraq for July, as of Tuesday, were the lowest monthly losses since May 2003. The Iraq theater may soon mirror other deployments in the Balkans, Europe and Asia, in which casualties are largely non-combat-related.

Since overseas troops have to be billeted, fed and equipped somewhere -- whether in Germany, Okinawa or Iraq -- the material costs of deployment in Iraq may soon likewise approximate those of other theaters. Anger over the costs of the "war" could soon be simply part of a wider debate over the need for, and expense of, maintaining a large number of American troops anywhere abroad.

For over four years, war critics insisted that we took our eye off Afghanistan, empowered Iran, allowed other rogue nations to run amuck and soured our allies while we were mired in an unnecessary war. But how true is all that?

The continuing violence in Afghanistan can be largely attributed to Pakistan, whose tribal wild lands serve as a safe haven for Taliban operations across the border. To the extent the war in Iraq has affected Afghanistan, it may well prove to have been positive for the U.S.: Many Afghan and Pakistani jihadists have been killed in Iraq, the war has discredited al-Qaida, and the U.S. military has gained crucial expertise on tribal counterinsurgency.

Iran in the short-term may have been strengthened by a weakened Iraq, U.S. losses and acrimony over the war. Yet a constitutional Iraq of free Sunnis and Shiites may soon prove as destabilizing to Iran as Iranian subversion once was to Iraq. Nearby American troops, freed from daily fighting in Iraq, should appear to Iran as seasoned rather than exhausted. If Iraq is deemed successful rather than a quagmire, it is also likely that our allies in Europe and the surrounding region will be more likely to pressure Iran.

These shifting realities may explain both the shrill pronouncements emanating from a worried Iran and its desire for diplomatic talks with American representatives.

Other rogue nations -- North Korea, Venezuela, Cuba (not to mention al-Qaida itself) -- also do not, for all their bluster, think that or act like an impotent U.S military is mired in defeat in Iraq.

Meanwhile, surrounding Arab countries may soon strengthen ties with Iraq. After all, military success creates friends as much as defeat loses them. In the past, Iraq's neighbors worried either about Saddam Hussein's aggression or subsequent Shiite/Sunni sectarianism. Now a constitutional Iraq offers them some reassurance that neither Iraqi conventional nor terrorist forces will attack.

None of this means that a secure future for Iraq is certain. After all, there are no constitutional oil-producing states in the Middle East. Instead, we usually see two pathologies: either a state like Iran where petrodollars are recycled to fund terrorist groups and centrifuges, or the Gulf autocracies where vast profits result in artificial islands, indoor ski runs and radical Islamic propaganda.

Iraq could still degenerate into one of those models. But for now, Iraq -- with an elected government and free press -- is not investing its wealth in subsidizing terrorists outside its borders, spreading abroad fundamentalist madrassas, building centrifuges or allowing a few thousand royal first cousins to squander its oil profits.

Iraq for the last 20 years was the worst place in the Middle East. The irony is that it may now have the most promising future in the entire region.