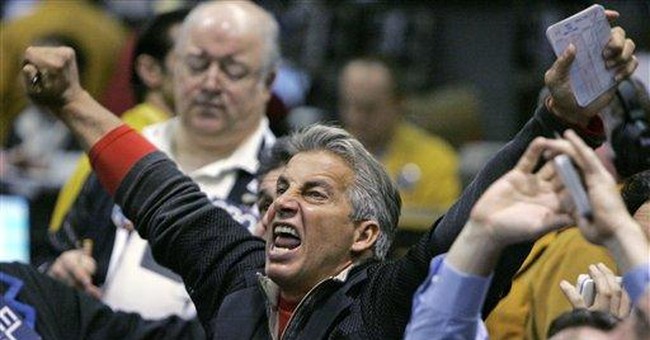 But despite the politicians' rhetoric, it is not hard to understand why America is in trouble.

First, there has been too much madcap real estate speculation. In recent years, housing prices were driven sky-high on the expectation that almost anyone, often with little security, could profit by borrowing easy money to buy and sell property.

Too many investors lost the old pedestrian notion that the purpose of a house was to be a home in which to live, to raise a family and to take pride in ownership. Its acquisition used to be a multi-year, if not once-in-a-lifetime, investment — not quite comparable to the easy buying or selling of volatile paper stocks and bonds. Others did not have the means to afford the type of home they purchased, once risky variable interest rates climbed.

Gasoline prices, meanwhile, are well over $3 a gallon in many places, sucking hundreds of dollars out of annual family budgets. But how long did we really believe that oil-exporting belligerents in the Middle East, Latin America and Russia, or our economic rivals in China and India, were going to allow the United States to continue gobbling up a quarter of the world's daily output at $20 a barrel?

American households have on average the largest houses in the world, the most cars and plentiful conveniences like big-screen televisions and DVD players. Yet there is a growing sense that we are paying the tab by borrowing trillions from the Chinese, Japanese, Europeans and South Koreans.

Some economists might argue that it is a win/win situation to have others toil to send us their cheap consumer goods, lend us the money to buy them and get little interest back on their debt. But when in history has a debtor ever felt better — in a moral, psychological or practical sense — than his lender?

Our candidates avoid that sort of honest tough talk. Republicans instead want an indebted government to pump up the economy by interest-rate cuts and tax rebates. And if we listen to Democrats, you would think no American could survive another maxed-out credit card without another new government bailout program.

Yet in truth, there are few options left to stimulate the already frenetic economy.

Current interest rates are not historically high. So cutting them might well convince our foreign borrowers to take their capital elsewhere for higher returns. And we can't pay for the federal programs we now provide, let alone expand them to offer universal health care or heavily subsidized college tuition.

What then can we do?

Second, instead of demanding new billion-dollar programs for health care and education, we should take more responsibility for our own welfare.

Americans need to readjust their budget priorities. One might be able to believe that a $200 dollar a month private catastrophic health plan is out of the reach of most Americans — if we were also to hear that sales of video games, cell phones and plasma televisions have crashed.

Third, we need to ignore the alarmist hysteria, calm down and appreciate that life is better than at any time in the last 5,000 years of civilization. People are living longer; we're healthier; and millions of Americans have the opportunities to travel, communicate and avoid physical drudgery that were once reserved only for a tiny aristocracy. There is plenty of excess in modern American life that can be shed without real hardship.

Finally, we must view our present economic challenges in a larger philosophical and ethical framework — and redefine success as being able to pay off what we owe, and spend only what we earn.

Who knows? Knowledge that we live in a nation that has a strong currency, no annual deficit and no aggregate debt to be passed on to our children might bring Americans as much pride and joy as the next iPhone or trip to Vegas.