Upside-Down Politics in the Middle East 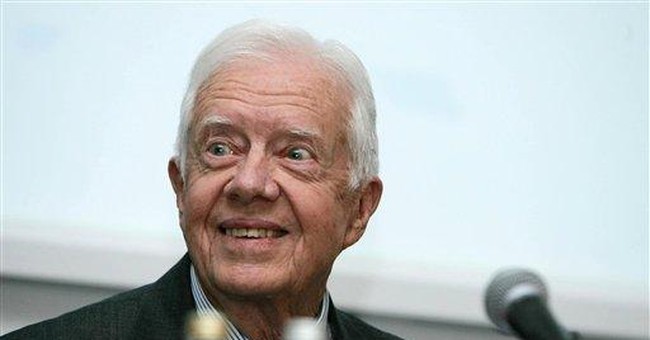 Jimmy Carter - a self-proclaimed champion of human rights and nonviolence - has called the U.S.'s unwillingness to accept the 2006 Palestinian election of the terrorists of Hamas "criminal."

But unlike Carter, Egyptian reformer Sa'd Al-Din Ibrahim - no friend of the United States - thinks members of Hamas are real criminals.

In an article on the terrorist organization's recent takeover of Gaza, Ibrahim wrote, "The Hamas fighters behaved in a barbaric, bloody manner, while repeatedly (shouting) ŒAllahu Akbar' and religious prayers. . . . The victors executed a number of Fatah leaders and fighters, shooting them or throwing them from the roofs of buildings, with no trial - not even a mock trial."

Carter is one among many Western liberals who either ignore or, worse, defend Hamas and other acknowledged enemies of free speech, due process and religious and political tolerance.

After the attempted jihadist bombings last month in London and Glasgow, new British Prime Minister Gordon Brown announced that his ministers were not to connect Muslims with terrorism. Then he even ordered the nomenclature of a "war against terror" dropped.

But a former British jihadist, Hassan Butt, argued in an op-ed in the Guardian of London concerning the failed plots that Islam is integral to the current epidemic of global terrorism.

"What drove me and many of my peers to plot acts of extreme terror within Britain, our own homeland and abroad," wrote Butt, "was a sense that we were fighting for the creation of a revolutionary state that would eventually bring Islamic justice to the world."

In anger at the Bush administration's refusal to meet with the Assad regime in Syria - which conducts assassinations of Lebanese reformers, aids terrorists in Iraq and funds Hezbollah and Hamas - House Speaker Nancy Pelosi flew to Damascus for direct talks.

Yet some of her critics were liberal Syrians fighting for freedom at great risk to their lives.

"So much of Syria's opposition was against Pelosi's visit, against the EU's talks with the regime," remarked Syrian reformist Akram al-Bunni. "They believe that these offers of friendship strengthen the regime and increase its totalitarian tendencies, and they're angry."

Western liberals seek to downplay the Islamic roots of terrorism and engage in dialogue with authoritarian regimes and movements. Meanwhile, Middle Eastern dissidents find themselves in an odd, if not embarrassing marriage of sorts with the conservative Bush administration on the need to identify and confront the causes and abettors of intolerance and terror.

What explains such strange political alliances?

Modern liberals - fearful of offending non-Westerners - have almost become more like old-time conservatives in their "live and let live" politics and neo-isolationism.

In contrast, some conservatives have gradually drifted away from their past realpolitik and easy detente with illiberal regimes.

Such an about-face did not start with George Bush and his now maligned neo-con advisers. It was evident earlier with Ronald Reagan. He rejected detente with the Soviet Union and instead championed religious and political dissidents, calling for the end of, not tolerance of, the tyranny of the Soviet "evil empire."

Liberals, on the other hand, have embraced multiculturalism often in guilt and as a reaction against past purported Western chauvinism. We are not supposed to judge different religions and foreign cultures by imposing our own arbitrary standards of morality.

Conservatives more often believe in universal absolutes: Some things like authoritarianism are always worse; others like freedom are always better, regardless of cultural differences.

At home in a freewheeling, affluent society, such rigid consistency may seem reactionary, unimaginative and unrealistic. But, abroad, it can translate into something different, as more Western conservatives than liberals have supported such troublemaking champions of individual rights as former Soviet dissident Natan Sharansky or the Somali-born former Dutch legislator Ayaan Hirsi Ali.

Finally, there is the matter of tactics. Liberals believe more in universal redemption through nonviolence. Evil is not so much innate as it is a result of poverty, prejudice or some sort of oppression. Its antidote then should be education, understanding, dialogue and diplomacy. So don't give up on an Assad, demonize Islamists or isolate Hamas.

Conservatives are more likely to believe evil is elemental, so combating and isolating it is the necessary first step in protecting the weaker from harm.

Who, then, condemns religious fanaticism, terrorists and their illiberal state supporters in the Middle East? Not necessarily, as we would expect, contemporary liberals. Instead, they now more often rail about the Patriot Act at home than the jailing or killing of innocents in places like Damascus and Gaza.