Who Is Illiberal On Immigration? 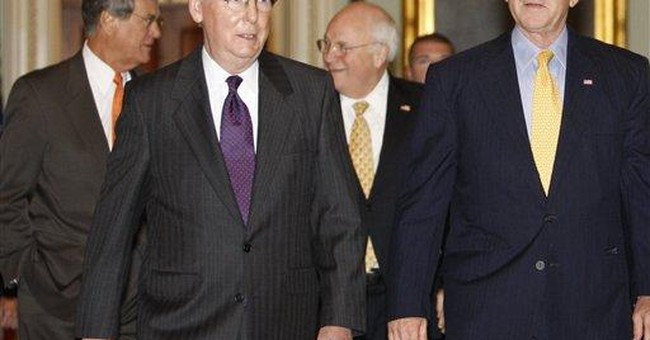 The collapse last week of a comprehensive immigration bill in Congress that called for a huge guest-worker program, fast-track visas and a sort of earned citizenship for illegal aliens has unleashed a backlash against those opponents of it who prefer to close the border first and legislate the details of illegal immigration later.

Washington pundits and Beltway politicians are furious at various critics of the bill, from radio talk show hosts and writers for conservative magazines to frontline congressional representatives and Republican presidential candidates like Rudy Giuliani, Mitt Romney and Fred Thompson.

These critics are dubbed cynical nativists - or racists - who have demagogued the issue and scapegoated hardworking illegal aliens. Even President Bush got into the fray when he alleged that conservative obstructionists were somehow not working in America's best interests.

But who's really being cynical when it comes to illegal immigration?

It has caved to pressure groups for over a quarter-century. The Immigration Reform and Control Act of 1986 ensured neither reform nor control. Instead, the law simply resulted in millions entering the United States through blanket amnesty and de facto open borders.

In many cities, current municipal laws bar police officers from turning arrested illegal aliens over to immigration officials. So why should the public believe that the proposed new law, with hundreds of pages of rules and regulations, would trump local obstructionism or effect any real change?

Had the bill passed, could we really have expected that the first impoverished alien unable to pay the fee or fine under its provisions would have been sent summarily home? More likely, he would have appeared on the 6 o'clock news as a victim of American mean-spiritedness and racism - and thereby instead won a reprieve or an outright apology.

Congressional supporters of the present legislation are themselves often engaging in politics of the most cynical kind. Rare "bipartisan" cooperation on the bill, which brought Sen. Trent Lott from Mississippi to the side of Massachusetts Sen. Ted Kennedy, is hardly statesmanship or a sudden outbreak of civic virtue. Rather, it is a new public face to the old alliance between profit-minded employers (and those who represent their interests) and demographically obsessed liberal and ethnic activists.

The former want assurances that there will be millions of aliens available to work at wages that Americans will not - with the ensuing medical, housing, schooling and legal costs subsidized by the taxpayer. The latter can't wait for more constituents in need of group representation who, it is hoped, will someday support them at the polls.

Most cynical of all, however, are the moralistic pundits, academics and journalists who deplore the "nativism" of Americans they consider to be less-educated yokels. Yet their own jobs of writing, commenting, reporting and teaching are rarely threatened by cheaper illegal workers.

Few of these well-paid and highly educated people live in communities altered by huge influxes of illegal aliens. Their professed liberality about illegal immigration usually derives from seeing hardworking waiters, maids, nannies and gardeners commute to their upscale cities and suburbs to serve them well - and cheaply.

In general, such elites don't use emergency rooms in the inner cities and rural counties overcrowded by illegal aliens. They don't drive on country roads frequented by those without licenses, registration and insurance. And their children don't struggle with school curricula altered to the needs of students who speak only Spanish.

For many professors, politicians and columnists, the gangs, increased crime and crowded jails that often result from massive illegal immigration and open borders are not daily concerns, but rather stereotypes hysterically evoked by paranoid and unenlightened others in places like Bakersfield and Laredo.

So, what is the truth on illegal immigration?

Simple. Millions of fair-minded white, African-, Mexican- and Asian-Americans fear that we are not assimilating millions of aliens from south of the border as fast as they are crossing illegally from Mexico.

In the frontline American Southwest, entire apartheid communities and enclaves within cities have sprung up whose distinct language, culture and routines are beginning to resemble more the tense divides in the Balkans or Middle East than the traditional melting pot of multiracial America.

Concern over this inevitable slowdown in integration and assimilation is neither racist nor nativist. It grows out of real worry that when millions of impoverished arrive in mass without legality, education and the ability to speak English, costly social problems follow that will not be offset by the transitory economic benefits cheap wages may provide.

Those fretting about delays in sealing the border along with proposed fast-track visas, millions of new guest workers and neglect of existing immigration law are neither illiberal nor cynical.

But their self-righteous critics may well be both.