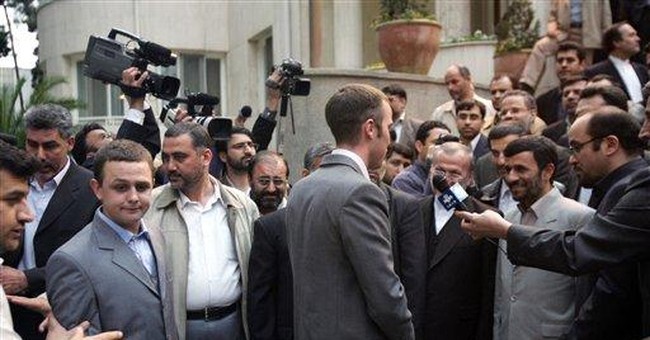 It's probably a good rule to do the opposite of anything the Iranian theocracy wants. Apparently, this government is now doing its darnedest to be bombed. So, for the time being, we should not grant them this wish.

In the last three years, the ranting adolescent theocrats in Tehran have alienated the United Nations' Security Council to the point of earning trade sanctions. That's a hard thing to do, given the U.N.'s bias toward the former third world and the way China and Russia value petroleum and trade above all else.

Prior to capturing last month 15 British Navy personnel, Iran had for years misled and embarrassed Britain, Germany and France, who all tried to negotiate a peaceful end to Iranian nuclear proliferation. And as a rule, these are European nations that will suffer almost any indignity to talk a problem away.

It is also nearly impossible to offend the Russian government on any matter of law - except squelching on debts. Still, Iran even accomplished that. Moscow is withdrawing from the country its nuclear technicians, who are critical to Tehran's efforts to obtain the bomb.

There is no need to mention Israel, which top Iranians have promised to wipe off the map - despite the fact that Israel is a nuclear power with a long record of military prowess. The Iranian leadership's efforts to promote a radical Persian Shiite Islam have terrified nearby Sunni Jordan, Egypt and the Gulf monarchies that now detest Iran as much as they do Israel.

Our beef with Iran, of course, goes back well before George W. Bush's presidency. "The Great Satan" as a slur for America was coined when Jimmy Carter was president. In 1979, student gangsters stormed the American embassy in Tehran and took hostages. Prior to 9/11, the Iranian-backed Hezbollah had killed more Americans than any other terrorist organization.

And by kidnapping last month the British sailors and marines, Iran de facto involved the European Union - Iran's largest trading partner. The country's leadership apparently worried little about retaliations from NATO, since their officers, according to one former top-ranking military official with whom I spoke, had been orchestrating the killing of Americans inside Iraq since well before Iranian vessels intercepted a British boat they claimed was in Iranian waters.

Those "realists," like former Secretary of State James Baker, who insisted that we talk to Iran are now silent. Iran's serial provocations seem to have finally turned off even those in the West who were always willing to give it a second and third chance.

What should we make of the Iranians' behavior?

Namely that the country's leadership is in deep political trouble. The Iranian government is desperate to provoke the West to win back friends in the Islamic world, and to quell growing unrest at home. Subsidizing food and gas, providing billions for terrorists and building nukes all cost money at a time when the state-run Iranian economy is in shambles.

Because of incompetence in their oil industry, the Iranian mullahs have achieved the impossible: Despite having among the world's largest petroleum reserves, their production is shrinking and they have managed to earn increasingly less petrodollars even as the world price has soared.

While the Iranian theocrats understand that the entire world, including many of their own citizens, is turning against them, they also know that this could change if a Western nation would just attack them. Their strategy seems to be to find a way to provoke someone to drop a few bombs on them, on the naive assumption that such an assault would be of limited duration and damage. Such an attack, they may figure, would earn them sympathy in much of the world .

It is undeniable that the U.S., without either invading or suffering many casualties, could use its air power to send the Iranian economy and military back to the mullahs' cherished 7th century. But there is no need to do so.

Instead, if the EU would cease all its trade with Iran, and if the West would divest entirely from the country - that is, boycott all companies that do any business with Tehran - the theocracy would face bankruptcy within months.

Even if further escalation were warranted, we could at some future date enforce a naval blockade of the Iranian coast that alone would determine what goods would be allowed into this outlaw regime.

For now, we should try as hard to avoid it as these desperate clerics seem to want it.