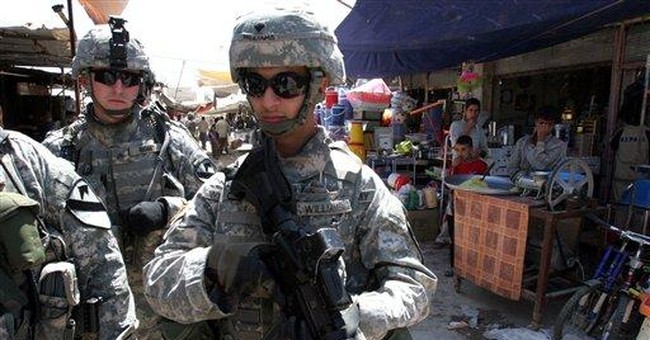 The threat from radical Islamic terrorists will not vanish when President Bush leaves office, or if funds for the Iraq war are cut off in 2008.

A frequent charge is that we are bringing terrorists to Iraq. That is true in the sense that war always brings the enemy out to the battlefield. But it's also false, since it ignores why killers like Abu Musab al-Zarqawi (the late al-Qaida chief in Iraq), Abu Nidal and Abu Abbas (Palestinian terrorists of the 1980s), and Abdul Rahman Yasin (involved in the 1993 World Trade Center bombing) were already in Saddam's Iraq when we arrived.

Moreover, the unpopular war in Iraq did not create radical Islamists and their madrassas throughout the Middle East that today brainwash young radicals and pressure the region's monarchies, theocracies and autocracies to provide money for training and weaponry. All that radicalism had been going on for decades — as we saw during the quarter-century of terrorism that led up to 9/11. And rioting, assassination and death threats over artistic expression in Europe have nothing to do with Iraq.

Right now, most al-Qaida terrorists are being trained and equipped in the Pakistani wild lands of Waziristan to help the Taliban reclaim Afghanistan and spread jihad worldwide. These killers pay no attention to the fact that our efforts in Afghanistan are widely multilateral. They don't care that our presence there is sanctioned by NATO, or involves the United Nations, or only came as a reaction to 9/11.

These radical Islamists gain strength not because we "took our eye off Afghanistan" by being in Iraq, but because Pakistan's strongman, Gen. Pervez Musharraf, can't or won't do anything about al-Qaida's bases in his country. And neither Bush nor Nancy Pelosi quite knows how to pressure such an unpredictable nuclear military dictatorship.

The Iraq war has certainly sharpened our relationship with Iran, but, of course, it's also not the cause of our tensions with Tehran. For decades, the Iranian government has subsidized Hezbollah, which during the 1980s and 1990s murdered Americans from Saudi Arabia to Beirut. It was not the current Iranian lunatic president Mahmoud Ahmadinejad but an earlier more "moderate" president, Akbar Hashemi Rafsanjani, who remarked, in 2001, that "one bomb is enough to destroy all Israel."

So Iraq is only one recent theater, albeit a controversial one, in an ongoing global struggle. This larger conflict arose not from the Iraqi invasion of 2003, but from earlier radical Muslim rage at the modern globalized world, the profits and dislocations from Middle East oil, and Islamic terrorism that ranges worldwide from Afghanistan to Thailand.

Should a peace candidate win the American presidency in 2008, prompting the U.S. to pull out of Iraq before the democracy there is stabilized, in the short term we will save lives and money. But as the larger war continues after we withdraw, jihadists will still flock to the Sunni Triangle. Hamas and Hezbollah will still rocket Israel. Syria will still kill Lebanese reformers. Iran will still try to cheat its way to a nuclear bomb. Ayman al- Zawahiri will still broadcast his al-Qaida threats from safety in nuclear Pakistan. The oil-rich, illegitimate Gulf sheikdoms will still make secret concessions and bribe increasingly confident terrorists to leave them alone. And jihadists will still try to sneak into the United States to kill us.

Critics of the present war can make the tactical argument that it is wiser to fight al-Qaida in Pakistan than in Iraq. Or that money spent in the frontline Iraqi offensive theater would be better invested on defense and security at home. Or that the human cost is simply too great and thus we should instead make diplomatic concessions to radical Islamists in lieu of military confrontation.

But, again, those are operational alternatives found in every war — as familiar as the old controversies over the French defensive Maginot Line of the 1930s or the American decision to defeat Germany first, Japan second. In the case of staying on in Iraq, at least, our long-term plan is to go on the offensive to confront radical Islamic terrorists on their own turf, and try to foster a democratic alternative to theocracy or autocracy.

That may be felt by the American public to be too expensive or too naive, but it is a direct strategy aimed at an enemy who seeks to terrorize the West and plans on being around well after 2008.

Depending on how we leave Iraq, this global war against radical Islamic terrorism will either wax or wane. But it will hardly end.