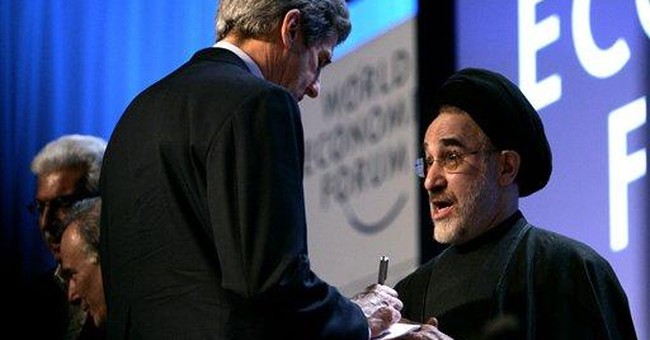 The late Susan Sontag, for example, justified the terrorists' suicide bombing: "Where is the acknowledgment that this was not a 'cowardly' attack on 'civilization' or 'liberty' or 'humanity' or 'the free world' but an attack on the world's self-proclaimed superpower, undertaken as a consequence of specific American alliances and actions?"

But there were also those on the right who argued that the jihadists' furor was payback for our own sins.

Rev. Jerry Falwell pronounced that America the godless had gotten what it deserved: "Pagans and the abortionists and the feminists and the gays and the lesbians who are actively trying to make that an alternative lifestyle . . . I point the finger in their face and say, 'You helped this happen.'"

Now there is another angle to the "blame America" game, this time from the secular right. In his book "The Enemy at Home," Dinesh D'Souza, of the Hoover Institution (where I work as well), charges that our decadent culture turns off traditional Muslims — otherwise the potential allies of American conservatives — and often renders them sympathetic to jihadist rhetoric.

He then goes further, arguing that the cultural permissiveness and obscenity of our leftists indirectly created a bin Laden. Now in a de facto alliance with the terrorists, the left, according to D'Souza, plots an end to traditional America.

D'Souza's solution is for conservatives here to embrace conservative Muslims, in a shared struggle against both the American left that misrepresented us and the jihadists who now misrepresent them.

But D'Souza's strained effort to fault millions of Americans for 9/11 proves no more convincing than was Susan Sontag's or Jerry Falwell's.

First, he libels a number of "domestic insurgents" who "want bin Laden to win." His list is nonsensical. Whatever one may think of the wisdom of Jimmy Carter or the late Molly Ivins, or of intellectuals like Tony Judt, Martha Nussbaum and Garry Wills, none of them wanted al-Qaida to defeat the United States — a victory that would have ended liberal tolerance here.

The novelist Salman Rushdie is also posted on D'Souza's proscription list. But why would the author of "The Satanic Verses" wish the jihadists to prevail when he himself was nearly killed as the object of an Iranian fatwa?

Second, D'Souza should reread al-Qaida's rambling complaints against the United States. They are just as often incoherent as they are angry at American decadence.

Bin Laden at times whined about the American failure to sign the Kyoto treaty on global climate, white racism, the bombing of Hiroshima, even improper campaign donations. If we took these terrorist rants as seriously as D'Souza does, then al-Qaida might seem to be a radical leftist organization furious at the supposed sins of a conservative United States.

Third, why should we think Islamic objections to our culture could justify the violence of the extremists? Jihadists may not like Western drug use, homosexuality, rap music or abortion any more than we do female circumcision, polygamy, sharia law and gender apartheid, which are as common in the Middle East as our purported offenses are in the West. But would anyone thereby justify Americans suicide-bombing Muslim civilians?

Fourth, in terms of giving possible offense to Muslims, others (such as the Indians, Russians and Chinese) have violently surpassed anything blamed on the United States. But bin Laden rammed planes into our towers, apparently because he bet (wrongly) that America was least likely to strike back. And wounding the United States — the most powerful symbol of a free, prosperous West — would offer the best propaganda coup for galvanizing other Muslims.

Fifth, and most regrettable, is D'Souza's belief that ideology trumps Americans' shared history and values. But despite the differences between red- and blue-state America, we find more in common with each other than with conservative Muslims in a gender-segregated Saudi Arabia or a religiously intolerant Iran.

An Alabama hunter and a Harvard professor, for all their likely political disagreements, share a commitment to the Constitution, freedom of the individual, the equality of women and tolerance of different religions. Head-to-toe burqas and honor killings for most of us are more offensive than rap music or "Brokeback Mountain."

Why do our provocateurs serially fault their own country in a time of war?

Such perversity earns instant attention. Consider the understandable uproar over Sen. John Kerry's recent characterization of America as a "pariah."

Evocation of 9/11 can also energize an otherwise moribund political agenda. And blaming us rather than jihadists offers the easy — but false — option of winning the war by just making changes at home, rather than doing the hard work of defeating Islamists abroad.

But worst of all, too many Americans embrace only their fantasy of a perfect United States, rather than the good America we actually have.