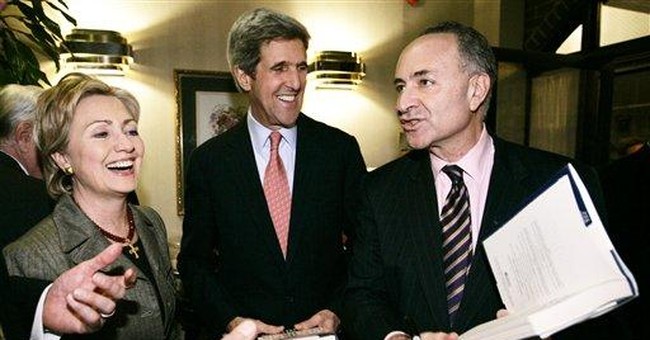 Sen. John Kerry, the 2004 Democratic candidate for president, is at it again with another rude gaffe, this one providing an unintended glimpse of the way many contemporary cosmopolitan elites characterize their homeland when abroad.

In the past, Kerry has said that our soldiers were "terrorizing" Iraqi civilians in their homes. He has also warned that uneducated Americans "get stuck in Iraq" -- a supposedly botched joke. Now, he assures an audience at the World Economic Forum in Davos, Switzerland, that the United States is a "sort of international pariah."

Kerry, who appeared on stage in Davos this past weekend with former Iranian President Mohammad Khatami, also proclaimed, "When we walk away from global warming, Kyoto, when we are irresponsibly slow in moving toward AIDS in Africa, when we don't advance and live up to our own rhetoric and standards, we set a terrible message of duplicity and hypocrisy."

Kerry could learn a few simple rules of etiquette that should guide the "message" of all high American officials when abroad:

Tell the Whole Truth Without Posturing or Spinning Kerry was clearly directing his criticism at the Bush administration, but the Kyoto Protocol, the international climate treaty, was first rejected by the U.S. in 1997. Ten years ago, President Clinton wisely chose not to refer the treaty to the Senate. Even that was not enough for outraged senators, who went ahead anyway to vote 95-0 to oppose any international agreement on climate control like Kyoto in which China, India and other developing countries would remain exempt. Kerry himself cast one of these votes -- an ironic example of what Kerry now calls "duplicity and hypocrisy."

Nor was the United States "irresponsibly slow" in regard to African AIDS relief. In fact, the Bush administration has devoted $4 billion annually to combat AIDS in Africa. That's triple what the Clinton administration budgeted. That generosity deserves praise, not scorn.

Remember we are war.

Kerry's criticisms are hauntingly similar to al-Qaida's own talking points. Both Osama bin Laden and Ayman al-Zawahiri have preposterously claimed that America's past inaction on Kyoto was a good excuse for going to war. In various ways, they have long blamed America for the spread of AIDS, and insisted that the United States is an international outlaw. When Kerry makes similar charges, it only enhances the jihadist propaganda, and weakens the United States in a war that is largely to be decided by relative resolve.

Don't single out the United States.

Kerry said nothing publicly critical to former President Khatami about his own theocracy's violation of United Nations non-proliferation accords. He could have lamented Tehran's support for the terrorists of Hezbollah who are undermining democracy in Lebanon. And he might have deplored the infiltration of Iranian jihadists into Iraq.

"Pariah" status is instead given only to Kerry's own homeland. Yet, the United States is currently working with the European Union and the United Nations to stop Iran from getting nuclear weapons. With NATO, we fight to save Afghan democracy. And we spend blood and treasure alongside an international coalition to offer Iraqis something far better than either dictatorship or theocracy. Some pariah.

For all his anger at the current administration, Kerry conveniently doesn't tell his audience that the United States Congress voiced overwhelming bipartisan distrust of Kyoto. He forgets that he and other Democrats in the House and Senate, in traditional bipartisan fashion, authorized wars against Afghanistan and Iraqi by large pluralities that are now so controversial.

What then drives John Kerry to say such ugly things?

Kerry must still hurt over his recent loss to the supposedly less sophisticated George Bush. And he and other leftist elites apparently must remind their kindred European counterparts that there are still refined Americans like themselves who are not flag-waving Christians from Texas.

But, mostly, it is intellectual laziness. It is always easier to cite America's flaws to applause than to take the time to explain the nature of its rare morality to catcalls. In truth, the United States has never been richer or more generous. Its military is preeminent, protects vulnerable allies and fights extremism worldwide. Immigrants risk their lives to reach our shores.

But we are in a deep spiritual crisis when a recent candidate for our presidency either cannot, or will not, patiently explain that to the world. Instead, Sen. Kerry, the new ugly American abroad, glibly misleads a global audience that his own America is a "pariah" -- a verdict that is as embarrassing to us as it is stupid for him.