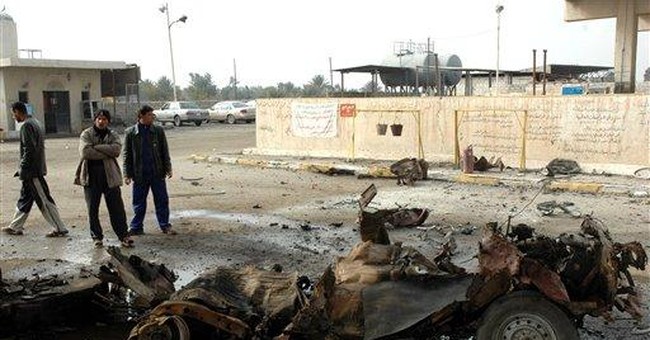 When it comes to intervening in international affairs, the United States is damned when it does and damned when it doesn't. Critics of U.S. policy are always quick to pounce — and in this age of globalization, they're only getting more impatient.

It's not just the global geopolitical map that has changed; people everywhere have, too. Globalization has enriched the planet beyond belief, leading to ever-increased demands of perfection. And thanks to 24/7 communications, we all instantaneously know when these expectations aren't met.

The world’s public expects that frightening problems, whether an earthquake in Pakistan, an Indonesian tsunami or a war in Darfur, will be resolved as quickly as a cell phone can transmit a digital photograph or a computer can retrieve information from the Internet. And fingers are pointed at the U.S. when, inevitably, this doesn't happen.

Yet no one, not even the all-powerful United States, can easily foster democracy in a country that suffered from 30 years of atrocities — and is now bitterly divided as a result of those atrocities. There is no super-ray that knocks down Korean or Iranian nukes with the touch of a finger. And the tragedy in Darfur sadly may remain a bloody mess whether the U.S. preempts, goes it alone or brings in an enormous coalition.

In many ways, the global reliance on the U.S. has only increased since the fall of the Soviet Union. While no one would wish to revisit the Cold War, Moscow, ruling with an iron fist, put down tribal and religious malcontents in its sphere of influence. Today, there are no superpower blocs; instead a multitude of freelancing killers have been unleashed with nothing much to fear from anyone.

How, after all, can one arrest Osama bin Laden hiding out in an Islamist and nuclear Pakistan? How does one entice nuclear China to force allied, communist and nuclear North Korea not to threaten a free, rich and rival Japan?

And at exactly the time the world has become more complex, the wired global audience is more impatient, demanding — and inconsistent.

When the Bush administration invaded Iraq in March 2003, it was accused of ignoring old allies and snubbing the U.N. Thus, in the next crisis, a wary United States waited on the U.N. to monitor Iran's nuclear delinquency. With multilateral deference, it also called upon Britain, France and Germany — the so-called EU3 — to reason with Tehran. But for all the inclusive diplomacy, Iran barrels ahead with its nuclear program. In another part world, as North Korea threatened to launch more missiles, America tried to find regional solutions — the so-called six-party talks involving China, Japan, North Korea, South Korea, Russia and the United States. But nothing much happened here, either, and impatient critics did an about-face: They screamed that the asleep-at-the-wheel Bush administration was "outsourcing" solutions and abdicating its responsibility to lead.

We've seen that in Darfur as well, where the global village has clamored for the U.S. to do something right away about the genocide. But, apparently stung by past charges of cowboyism, a gun-shy American sheriff has opted not to act preemptively. If we think Afghanistan or Iraq is chaotic, imagine the mess of airlifting Marines into the Horn of Africa to save the victims of tribal and religious killers — as al-Qaida promises to send in more jihadist reinforcements.

The roster of this do/don't schizophrenia is endless. We once had troops in Saudi Arabia to protect the monarchy there from Saddam. But once we removed that threat, the monarchy charged we had only empowered a far worse Iran. We were supposedly once too cynically disengaged from the Middle East, but now our efforts to promote democracy there only elected the terrorists of Hamas.

It may be hard for the world's new impatient generation to accept the truth: There are no simple black-and-white solutions at little cost in today's technologically connected but politically fragmented world. Restless Americans and a demanding global public are going to have to accept that in Afghanistan, Darfur, Lebanon, Iran, Iraq, North Korea, Somalia and the West Bank, the United States itself — not just the bogeyman George Bush — has only bad and far worse choices.

What sometimes works against jihadists and tyrants in one place won't always in others. Unilateral, multilateral, react or preempt — these have no innate moral value but are just differing strategies for a baffling multitude of new problems that all defy a cookie-cutter approach. After 9/11, caution in the long run may prove deadlier than intervention has in the short term. People will die daily on CNN no matter what we do.

The only constant in this wired-together but split-apart global family? The frantic American parent will try its best, as it is blamed for saying no, yes — and everything in between.