John McCain is ready to lead 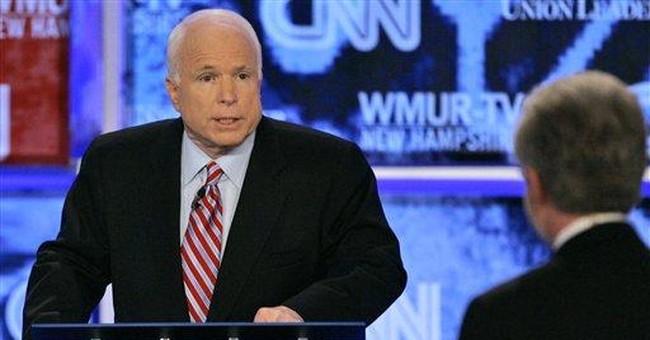 John McCain did indeed stand alone in last night’s presidential debate -- as the only candidate ready to lead on day one and take on the big challenges facing our country.

Candidates often need to use these debates to make the case that they can be presidential. Not John McCain. Every room he walks into, every podium he approaches, he’s a Commander-in-Chief.

We saw that in the forum’s second hour, when a young woman from Bedford, New Hampshire, showed great courage in standing up to talk about her brother, who lost his life serving our country in Iraq, and asking what the candidates would do to ensure the safe return of his comrades in harm’s way. And in return, she got straight, heartfelt talk from John McCain, who stood up, walked to the edge of the stage, and told her that though this conflict was poorly mismanaged, the sacrifices made by her brother were not in vain, and that in this titanic struggle, we will prevail. It was truly the defining moment of the evening.

When the debate turned to the topic of illegal immigration, John McCain gave no quarter. Immigration reform is something he has been working on for many years, and though the political calendar has crossed paths with the congressional timeline for considering this issue, he was ready and willing to take all comers and critics. No hedging. No hemming. No hawing.

Something that John McCain said towards the end of the debate resonated greatly with me – the need to protect the American family. He’s never betrayed the principles that led him to sign up early on as a foot soldier in the Reagan Revolution. He has always been steadfastly committed to the dignity of life and the appointment of strict constructionist judges to the bench, and though at times he has had to do it alone, he has fought to cut wasteful spending.

He’s also never betrayed the tradition of service that inspired him to sign up as a young man to serve his country. It was his faith that sustained him in the most difficult hours of his life, and it is his enduring faith in our country and optimistic vision for its future that will guide him in the Oval Office.

John McCain won this debate. It’s that simple. The same way in which he took on his critics last night, he will take on with no reservation the Washington Democrats who seek to roll back all we have done to keep our country safe and our economy growing. He is the right president for these times. I’m proud to be a friend of his, and proud to support his candidacy.