Lessons in Democracy from Walt Disney 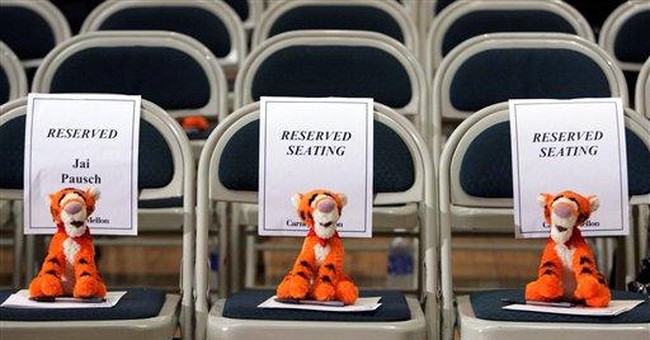 Editors' Note: Every month, Townhall Magazine highlights some of the outstanding blogs written by users in our community. The following is an entry from American Sweetheart and appears in the July issue of Townhall Magazine.

A few weekends ago, I watched a movie with my son called “Tigger & Pooh and a Musical Too.” It’s a very cute show—my son loves Tigger, and Disney is still making family-friendly movies, so I was on board.

Upon Rabbit’s inauguration, he breaks into song to tell the citizens what he will do for them as mayor, including a long list of new rules for the region.

The always-pessimistic Eeyore immediately asks if anyone is afraid and, after citing a few new rules, says that he has a feeling Rabbit isn’t done yet. He was correct.

Everyone must do their chores at the same time of day. Lunch is always promptly served at noon. Pooh must give up honey (there is too much in his diet) in favor of more vegetables. Tigger’s bouncing is restricted to 30 minutes per day.

The list quickly grew longer, and all of the new laws were posted where the residents could see. Rabbit appointed Beaver as his deputy mayor and had him patrol to make sure everyone was following the rules. Tigger decided that he had had enough of the excessive restriction on his personal freedom, and so half of the Hundred Acre Wood seceded from Rabbit. A line was painted down the middle of the Hundred Acre Wood, and no one was allowed to cross the line.

The plot went on to divide the friends further, as one side had no freedom and the other had possibly too much freedom, with no rules at all.

I saw so many parallels to current events, and I couldn’t help but be completely absorbed in this children’s movie. Kids understand the root of adult problems; they understand what is fair and what is not and could certainly come to those conclusions while watching this movie.

If you have young kids, I’d honestly take the opportunity to watch this movie with your kids. Let them enjoy the music. Let them enjoy the classic characters Tigger and Pooh. But after the movie, ask them how they felt about the events. Ask them what was right and what was wrong about what happened to the residents under Rabbit’s rule and under Tigger’s. This is a great movie to engage your children and to teach basics civics and the value of freedom.

CARTOONS | AF Branco
View Cartoon
Grenell: Biden's 'Quiet Diplomacy' is Concerning as Hamas Attacks Israel
Katie Pavlich
Here's What's At Stake If Smith and Wesson Loses Its Case Against New Jersey
Matt Vespa
Whitmer Moves to Shut Down Canadian Oil Pipeline. The Company Is Having None of It.