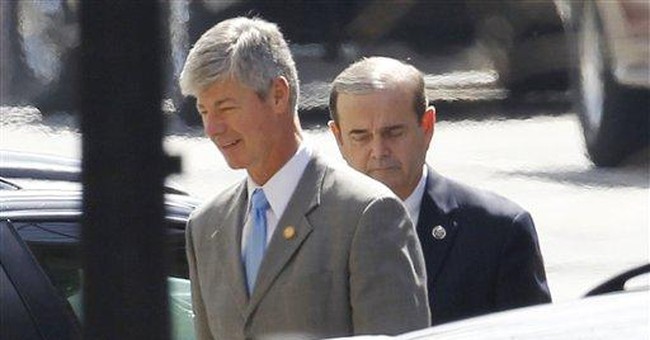 We are now beginning to enter the Kansas-Nebraska Act stage of the socialist crisis of the Republic. At our constitutional founding, the evil of slavery had been crudely evaded. In 1820, the Missouri Compromise was enacted that prohibited the abomination north of 36/30 degrees latitude (about the middle of Missouri).

But with the western push of the frontier, a new compromise was needed. So the Kansas-Nebraska Act of 1854 decreed that the "popular sovereignty" of each territory should decide whether they would be slave or free states. But then, adherents of both the abomination and freedom migrated to Kansas to struggle -- with their bodily presence -- for their respective causes. First there was politics. Then the political rhetoric turned violent. Then real violence ensued. Kansas became known as Bleeding Kansas. John Brown, most famously, applied unjustified, murderous violence for his righteous cause of ending slavery and was hanged, but the Civil War ensued because, as Lincoln sagely explained:

"A House divided against itself cannot stand. I believe this government cannot endure; permanently half slave and half free.

It will become all one thing or all the other.

Either the opponents of slavery, will arrest the further spread of it, and place it where the public mind shall rest in the belief that it is in the course of ultimate extinction; or its advocates will push it forward, till it shall become alike lawful in all the States, old as well as new -- North as well as South."

Now we enter our History's second stage in the struggle against the abomination of socialism. Just as slavery had been contained in the South, so entitlement socialism has, until this week, been more or less contained in service to only the poor and the elderly -- and even in those programs (for the elderly) on the principle of beneficiaries paying monthly premiums for the benefits they will later get (Medicare/ Social Security). Only the poor under Medicaid received benefit without premium payment.

But now, just as the Kansas-Nebraska Act of 1854 broke through the slave state limitation to the South, the Democratic Party's 2010 health care law has broken socialism's boundary of being so limited. Now, the chains of socialism are to be clamped on to the able-bodied middle class -- not merely the already presumed helpless poor and old who have paid their insurance premiums.

Even the New York Times -- after the vote -- admits what the bigger goal has been all along. In Wednesday's edition ("In Health Care Bill, Obama Attacks Wealth Inequality" by David Leonhardt), they point out: " Beyond the health reform's effect on the medical system, it is the centerpiece of his deliberate effort to end what historians have called the age of Reagan. ... Speaking to an ebullient audience of Democratic legislators and White House aides at the bill-signing ceremony on Tuesday, Mr. Obama claimed that health reform would 'mark a new season in America.'.... Above all, the central question that both the Reagan and Obama administrations have tried to answer -- what is the proper balance between the market and the government? -- remains unresolved. But the bill signed on Tuesday certainly shifts our place on that spectrum."

I thank The New York Times for that honest statement of historic fact.

For example, the new law takes away from insurance companies the right to charge for insurance based on actuarial risk -- which is the essence of insurance. Now they will charge what the politicians tell them to charge -- and pay such benefits as the politicians order them to pay. They may, for a while, make money, but that will be at the sufferance of the politicians. One may call this mere regulation, but it is regulation to such a degree that it constitutes effective ownership of the insurance company. The former equity holders in such companies are now merely nominal owners. Also, the new law provides for taxes on investment income to pay for socialized health care, sucking out the lifeblood of our economy to the deathbeds of the destitute.

When these intrusions are combined with 1) the nationalization of GM and Chrysler, 2) the partial nationalization of the banks, 3) the establishment of trillion-dollar taxpayer-funded slush funds (stimulus package and TARP) and 4) the planned 10-year, $10 trillion of further government debt (which steals from our children and grandchildren dollars yet unmade by them to pay foreign debt holders), the center of gravity of our economy moves from the private sector to the public sector.

And just as the free states could not tolerate the spread of slavery into their midst, so, too, free middle-class America -- if it still has its historic character -- will not tolerate the yoke of socialism put upon our necks.

First, the unambiguous will of the majority has been defied by the vote of Congress last Sunday.

Come November, we shall see whether the system can still turn the popular will into the constitutionally permissible legislative will of the majority. If it can, all will be well and the crisis will end. Rallying the vote between now and November is roughly equivalent to the early stage of the Kansas-Nebraska Act period -- people started migrating to Kansas to support their convictions.

But come November, if the majority still opposes the socializing of health care delivery and the other central government intrusions, and yet the corrupt bargains and constitutional distortions of Washington deny that will its just expression -- then, for the second time in our history, we enter that dangerous period where the House resolves its temporary division. Let us devoutly pray --and commit to ourselves -- that this time freedom shall be reacquired … peaceably.