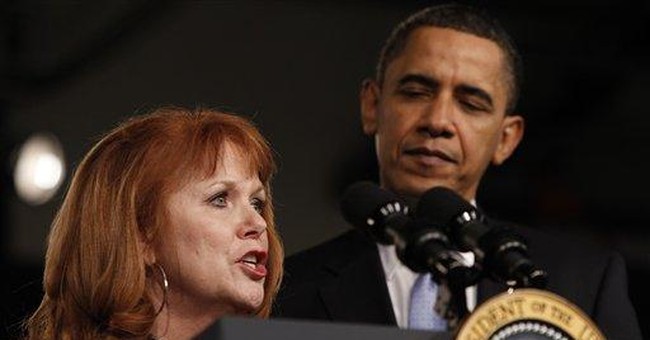 The president and the Democratic congressional leadership are fighting furiously to pass, with no Republican votes, the ever-less-popular health bill. An Associated Press poll last week shows that four in five Americans don't want the Democrats to pass a health care bill without bipartisan support, while almost all polls are showing support for the current bill to be at only 25 percent to 35 percent. And all polls show high negative intensity.

The resistance of our governing system to passing so unpopular a bill is so powerful that it has driven Democratic Speaker of the House Nancy Pelosi and Democratic Chairwoman of the Rules Committee Louise Slaughter -- at least for the moment -- to actually publicly consider violating the constitutional process for enacting laws.

Under their announced scheme, instead of following the constitutional voting process -- i.e., 1) The House first votes for the despised Senate bill, then 2) after that is signed into law by the president and 3) the Senate passes the popular amendments that the House wants, 4) the House votes for that second Senate bill of amendments, which, 5) the President then signs into law -- under the proposed scheme, the Senate bill would be "deemed" to have passed the House and become law without a presidential signature. Then the Senate would pass the House-demanded amendments, and the House members would then cast only one vote -- for the amendments they like, rather than the underlying Senate bill they hate. Thus (so Pelosi's theory holds) politically protecting House members, who could say they never actually voted for the publicly despised Senate bill.

But, as has been pointed out in several venues in the last few days, Article 1 Section 7 of the U.S. Constitution requires that before a bill becomes law, (1) "Every Bill which shall have passed the House of Representatives and the Senate, shall, before it become a Law, be presented to the President of the United States; If he approve he shall sign it, but if not he shall return it"; and, (2) "in all such Cases the Votes of both Houses shall be determined by Yeas and Nays, and the Names of the Persons voting for and against the Bill shall be entered on the Journal of each House respectively."

It is those two provisions of the Constitution that would be evaded: 1) the House vote, with the names and votes of the individual members publicly published, and 2) the president's signature. That is James Madison's precise 18th century version of transparency and accountability.

The Supreme Court has only recently emphasized that those procedures must be followed precisely. In Clinton v. New York City, 1998, (In which the court found the line-item veto as passed by Congress unconstitutional), Justice Stevens wrote the majority opinion:

"The Balanced Budget Act of 1997 is a 500-page document that became 'Public Law 105-33' after three procedural steps were taken: (1) a bill containing its exact text was approved by a majority of the Members of the House of Representatives; (2) the Senate approved precisely the same text; and (3) that text was signed into law by the President. The Constitution explicitly requires that each of those three steps be taken before a bill may 'become a law.'" Article I, Section 7.

And: "The procedures governing the enactment of statutes set forth in the text of Article I were the product of the great debates and compromises that produced the Constitution itself. Familiar historical materials provide abundant support for the conclusion that the power to enact statutes may only 'be exercised in accord with a single, finely wrought and exhaustively considered, procedure.' Chadha, 462 U.S., at 951."

Some have argued that the "Gephardt Rule" (House Rule XXVII) -- in which a similar "self-executing rule" "deemed" the House to have voted on a new debt ceiling, is valid precedent. Wrong. That rule was for a joint resolution -- not a bill. A joint resolution is a guide to the House. It is not a bill under the Constitution and has no force of law. Because a president has nothing to do with a resolution, a self-executing rule is valid for a resolution, but not for a bill.

It speaks to the sturdiness of the system our founders installed that it is, as intended, so resistant to passing major legal and cultural changes against the overwhelming will of the public. So resistant that, in frustration, the Democratic speaker of the House has been driven to consider breaking her oath of office and violate the Constitution in order to get her way. Presumably, when she is better counseled, she will dismiss this wayward idea.

Should she follow through on her threat, however, the product would not be a law, but a nullity -- an aborted, inert thing.

It would be, in essence, an attempted congressional putsch against the Constitution.

But still our governing system would not be broken as long as the president would do his constitutional duty -- as assuredly he would -- and neither sign nor veto it, but rather, publicly declare it a nullity, tear it up and burn it, as one would a piece of trash.

I refuse to conjecture on any alternative action by the president.

In other news, the White House spokesman last week engaged in an indecorous public exchange with the Chief Justice of the Supreme Court.