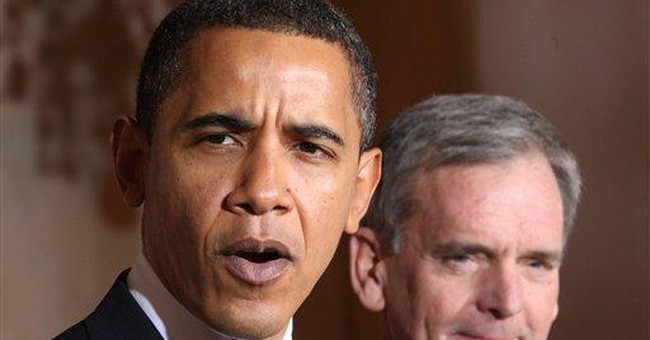 There has been some confusing reporting in the past few days regarding President Barack Obama's plans for the Defense Department budget. Officially, the Office of Management and Budget is claiming that it will increase the budget by 8 percent. But because most of the Iraq and Afghanistan war costs have been funded through supplemental appropriations rather than the regular department budget, total military funding remains a mystery. Mark me down as suspicious. I have been told by sources at the Pentagon that they have been told not to expect full funding of all existing programs. And there is evidence that Obama has been planning to force cuts on our military for some time.

According to The Boston Globe on Nov. 10, 2008, the need for budget cuts at the Pentagon (prepared last year by a Defense Department advisory committee that proposed possible program cuts on the assumption that the DOD would not be appropriated enough money to cover all current defense programs and weapon systems) was the enthusiastic subject of an Obama transition group study back in October:

"'Business as usual is no longer an option,' according to one of the internal briefings prepared in late October for the presidential transition, copies of which were provided to the Globe. 'The current and future fiscal environments facing the department demand bold action.'"

However, Obama gave no hint of these plans (if he has them) during the campaign. At the time, I preserved the Obama-Biden campaign Web site pages on defense policies just in case the day would come when Obama started to cut the defense budget. Here (in part, but it goes on for pages like this) is what Obama's Web site promised during the campaign:

"A Military Under Strain: Currently, our soldiers, seamen, airmen and Marines are deployed around the globe, working valiantly to defend our nation. Yet, these heroes are under-resourced and asked to do too much by a policy that has too often taken their sacrifice for granted. Due to their incredible courage and ingenuity, they persevere, but at incredible cost to themselves and their families.

"Recruitment and Retention Problems: A country of 300 million strong should not struggle to find enough qualified citizens to serve. Recruiting and retention problems have been swept under the rug by an administration that does not understand the value of service to our nation.

"A System Not Serving our Troops as Well as They Serve Us: As the shameful events at Walter Reed Army Medical Center and the recent reports on growing numbers of homeless and unemployed veterans show, we simply are not taking proper care of our wounded warriors and veterans.

"Fully Equip Our Troops for the Missions They Face: Barack Obama and Joe Biden believe we must get vitally needed equipment to our soldiers, sailors, airmen and Marines before lives are lost. We cannot repeat such failures as the delays in deployment of armored vehicles, body armor and Unmanned Aerial Vehicles that save lives on the frontlines.

"--Invest in a 21st Century Military

"--Restore the Readiness of the National Guard and Reserves

That makes it sound as if he was planning to increase spending dramatically. We shall see.

But even his decision to keep former President George W. Bush's defense secretary, Robert Gates, could be judged shrewdly if he plans cuts. A Republican holdover is in the weakest possible political position to defend his department's budget. If Obama had selected his own powerful Democratic Party politician for defense secretary (as he did with Hillary Clinton at the State Department), that person would fight to defend his or her budget. You can bet Hillary will bring all her power to bear on increasing the State Department budget. But as a Republican, Defense Secretary Gates has no stick to fight possible defense budget cuts.

Even Obama's decision on which Republican political appointees Gates could keep was revealing. He let Gates keep about two-thirds of his appointees -- mostly in the war-fighting parts of the Pentagon budget. But Obama insisted on his own appointees (which he, of course, had every right to do) for those slots that managed family support and other social services (as opposed to war fighting). Now, those are also vital -- taking care of the health, housing and education of our troops and their families.

But it is revelatory that politically Obama wants to manage DOD social services closely. However, in the war-fighting and weapons-systems part of the Defense Department, he will leave Bush appointees in charge. They will not be able to defend their vital budgets politically, and Obama can hold them responsible for gutting their own programs, should he try to do so.

Of course, at a time when he is proposing trillions of dollars of deficit spending -- and at a time when our military needs at least $100 billion just to replace war materiel (such as trucks, other vehicles, munitions, communications equipment, etc.) that has been used up in Iraq and Afghanistan and not yet replaced -- he is not allocating any of the trillion-dollar "stimulus" deficit to pay for such assembly line-starting and militarily necessary new spending. That might be taken as a hint of his long-term plans for defense needs.

We have elected ourselves a true artist. But beware: "Ars est celare artem." (Translation: "True art conceals the means by which it is achieved.")