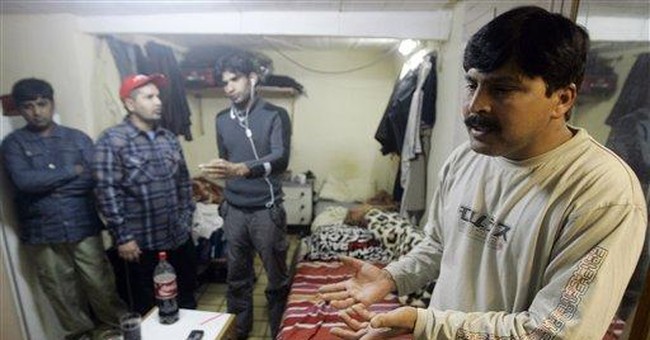 In 2006, Congress passed a law to spend more than $7 billion to build a fence to secure our Mexican border. Less than two weeks ago, Homeland Security Secretary Michael Chertoff announced at a news conference that a high-tech "virtual fence" project along part of the U.S. border with Mexico finally was ready for service as a substitute for an actual physical fence -- you know, concrete, barbed wire, watchtowers, moats.

The secretary was very specific. He said: "I have personally witnessed the value of this system, and I have spoken directly to the border patrol agents who have seen it produce actual results, in terms of identifying and allowing the apprehension of people who were illegally smuggling across the border."

The so-called Project 28 virtual fence was built near Nogales, Ariz. The $20 million project of sensor towers and advanced mobile communications was supposed to be ready by mid-2007 but was delayed by software problems.

Some of us wanted a regular physical fence. But the White House assured us that a virtual fence would be better. And by the way, both Sen. Clinton and Sen. Obama in last week's debate said they were for the virtual fence, which in their view, might obviate the need for a physical fence.

So Chertoff's announcement less than two weeks ago was good news. But only five days later -- last Thursday -- The Washington Post reported: "The Bush administration has scaled back plans to quickly build a 'virtual fence' along the US-Mexico border, delaying completion of the first phase of the project by at least three years and shifting away from a network of tower-mounted sensors and surveillance gear."

Technical problems with the same 28-mile project that Secretary Chertoff personally had vouchsafed were cited by Homeland Security Department officials as the reason for the three-year delay of the project -- which, let me remind you, the secretary had said just five days before was ready to go operational.

So instead of starting the promised-for, partially funded border fence on President Bush's watch -- as he promised -- his new plans provide for the first 28 miles of the 2,000-mile fence to be started in the third year of the next presidency. I guess he never really wanted to build that fence.

But Secretary Chertoff did promise to "double the fleet" of our unmanned surveillance aircraft -- from three to six for 2,000 miles of the border.

About 75 percent of the public wants our border secured. I guess that does not include the president -- nor the Democratic Party candidates to replace him.

Kaus then approvingly cites Tammy Bruce for this conclusion: "In other words, we've all just been taken for a ride. In order to do whatever possible to avoid building an actual physical fence Bush (et al.) made sure a monumental amount of money was wasted on a fake, untested, unreal fence to placate conservatives."

I am not by nature a believer in large political conspiracies, noting that usually events can be explained by merely a conspiracy of idiots against the forces of reason. And so perhaps in this case, too. The Bush administration and the leaders of the Democratic Party both want (for different reasons) no obstruction to the full flood of illegal workers (for the Republicans) and voters (for the Democrats) into the United States, thus their adamantine opposition to a physical obstruction to such passage. Whether they truly believed in the efficacy of the virtual fence or not I must leave up to soul readers.

But either way, the announcement last week demonstrates the complete political failure of those of us who have argued for an effective policy implementation to gain control of our borders promptly and stanch the flood of illegal border crossings. It is now highly likely that whosoever wins the presidency, we are facing eight more years of unsecured borders and the addition of many millions more illegal immigrants into our already unstable body politic. "Alea iacta est." (The die is cast.)