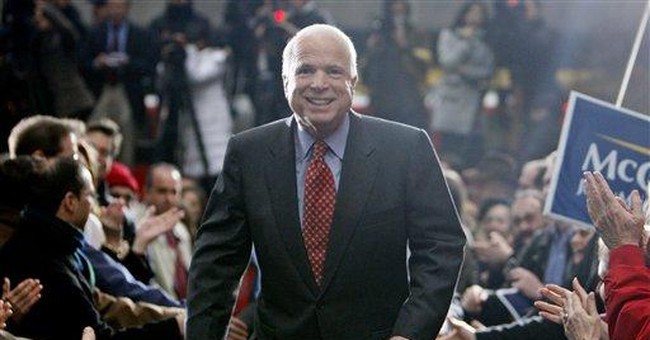 Assuming John McCain gets the GOP nomination, it will show how whimsical history can be. It would be the first time in living memory that a Republican presidential nomination went to a candidate who was not merely opposed by a majority of the party but was actively despised by about half its rank-and-file voters across the country -- and by many, if not most, of its congressional officeholders. After all, the McCain electoral surge was barely able to deliver a plurality of one-third of the Republican vote in a three-, four- or five-way split field. He has won fair and square, but he has driven the nomination process askew.

In the current instance, the lost nail was a viable conservative candidate. And despite the crabby, orthodoxy-sniffing, slightly over-the-hill condition of the conservative Republican majority, it still could easily nominate its candidate. In fact, we had two strong conservative candidates, either of whom almost surely would have unified the party early, as George W. did in 2000. But through accidents of history, neither ran.

Consider the recently very popular, tall, attractive, smart, eloquent, conservative, successful two-term Republican governor of one of our most populous swing states -- married to a beautiful Hispanic woman, no less. In fact, he is the son of a former president. Unfortunately for him and the party, he is also the brother of the current president. If Jeb Bush's name were Jeb Smith, the former Florida governor easily could have kept the conservative two-thirds of the Republican vote united and won the nomination. But fate made him a Bush in the only election in the past 20 years when no Bush need apply.

Or consider the cheerful, handsome, solidly conservative Virginia senator expected to run as the son of Reagan. Unfortunately, he uttered three little syllables: Ma-ca-ca. He lost his re-election, and so adieu, Sen. George Allen.

These two quirks of history have nothing to do with the fundamentals of the conservative hold on the GOP. But what was left after the two strongest candidates couldn't run was one venerable candidate (McCain), one suspiciously newly minted conservative (Romney), one not-quite-plausible factional figure (Huckabee), one social liberal (Giuliani), a quixotic anti-war candidate (Paul) and an older Southern gent with a smashing younger wife for whom he seemed to be saving most of the energy he should have used in what was risibly called his "run" for president (Thompson).

So, the mischievous gremlins and elves inside the wheel of history have served up John McCain to lead Ronald Reagan's party into November battle. McCain is both the finest war hero since Eisenhower to run for president and the one senior Republican who has gleefully put his thumb in the eyes of his fellow Republicans and conservatives for a decade and a half. He is the apostate leader of a party tending toward ossified orthodoxy.

Conservatives, such as Rush Limbaugh, worry (with good cause) that this fluke of Republican history might permanently deflect the course of the party away from conservatism. And indeed, we came to power in the party through, in part, a fluke of history. In the nomination fight of 1964 (in which I was a youth coordinator for Barry Goldwater in California), Goldwater had been running even or behind all spring. (He lost New Hampshire, Massachusetts, New Jersey, West Virginia, Oregon and Pennsylvania. He won Illinois, Texas, Indiana, Nebraska and some caucus states.)

We went on to the Cow Palace Convention in San Francisco, where we Goldwaterites and Rockefeller exchanged vulgar, angry epithets. Rockefeller, Mitt's dad, George Romney, and other moderates refused to support Goldwater. Some moderates formed "Republicans for Lyndon Johnson."

Would we conservatives have taken over the party if Goldwater had lost that California primary? Perhaps we had history's wind at our backs anyway, but I remember being very grateful at the timing of young Nelson Jr.'s arrival. History is made of such things.

If we conservatives sit on our hands this November, as moderates did 44 years ago, will we marginalize ourselves within the party (as the old Romney moderates did)? Or will we be saving the party for the grand old cause? Let's watch McCain's next moves.