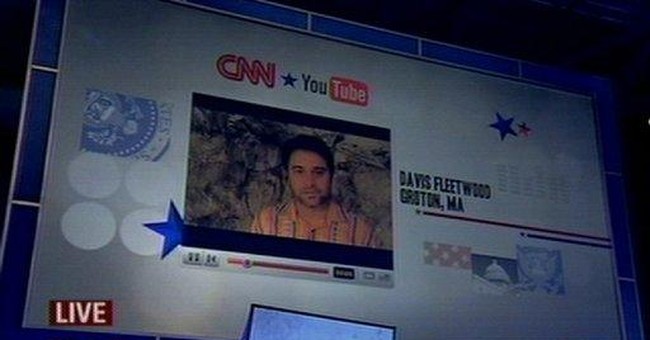 Just as our troops are fighting the terrorists in Iraq so we don't have to face them here at home, I watched the Democratic Party presidential debate on Monday so you wouldn't need to let those egregious people into your own living rooms. (Although, obviously, our troops in Iraq face deadly duty, while I only face deadly dull duty.)

But I did learn a few things. For the first time Monday, CNN provided us with sustained close-up shots of Sen. John Edwards' haircut, and I can now understand why he paid between $400-$1,200 a cut. At middle range, it looks deceptively like your average $18 strip-mall haircut. And it seems to look the same from the left side of his face.

But the close up from his right side is a revelation. Girding the long side of his part is an extraordinary spring-like wedge of hair running from front to back. And though bouncy, every hair remains in place -- even during vigorous head shaking and bobbing. This gives his entire hairstyle a lively, youthful look. Most middle-aged men's hair just sits on the head like a wet rag. Admittedly, the bouncy wedge does look a little flouncy when viewed from the candidate's front right. But from any other angle and from all distances other than close up, it simply gives his entire visage a healthy, animated look. Well worth a thousand bucks a crack -- at least in his part of the two Americas.

However, in Edwards' only memorable comment of the night, he rather put his foot into it. Each of the candidates was asked to describe something he or she approves of and something he or she disapproves of regarding the candidate to the left. Sen. Hillary Clinton was to Edwards' left, and he expressed disapproval of her pink (or, perhaps, coral) sweater. The questioner was clearly looking for policy disagreements, so Edward's reflexive comment on her appearance rather reminded the audience of his reputation for excessive concern with matters of grooming. It also was suggestive of his inner sexism (despite his wife's claim that her husband is better than Hillary for the fairer sex) as he would hardly have commented on a male candidate's suit jacket.

Given Edwards' essential vacuity (tempered by his instinct for southern populist demagogy), he will test how far he can make his way on Arthur Miller's "smile and a shoe shine."

Most of the rest of the debate involved the candidates showing little genuine emotion or conviction and no new ideas. Questions about healthcare were handled with outrage at President George Bush and a total evasion of the challenges of actual cost controls (Medicare, for example, is unfunded through 2070 to the sum of 40 trillion dollars or more). When one questioner asked the candidates whether they would cut benefits or raise taxes, they all agreed that neither was really necessary. Although, admittedly, Obama looked far more sincere as he emoted about the terrible problem than did the others.

Only one issue evoked genuine passion, and that was: How quickly would you retreat from Iraq? And here, the candidates had clearly been doing earnest research before the debate. Gov. Bill Richardson said he could get all the troops out in five months. Sen. Christopher Dodd claimed he could do it in seven months, while Sen. Joe Biden was insistent that it would take a full nine months to a year to move American troops and civilians down the two-lane road through Basra to the sea.

Bragging at how quickly they could retreat seems to be a peculiarly liberal inclination. While, as I recall, conservative little boys practice quick draw with their cap guns while playing cowboys and Indians, apparently liberal little boys practice how fast they can throw up their hands to surrender to the guys in the black hats.

In truth, there are nasty rumors floating around in military circles regarding the level of casualties that may be taken during a retreat of 250,000 American troops and others. As unpleasant as the Saigon retreat by helicopter is in American memory, that was for only the last of the embassy personnel. Nixon had carefully removed 365,000 soldiers from Vietnam during the period from 1969 to 1973.

Removing 250,000 Americans from Iraq over even a year on perhaps 20,000 flatbed trucks through a sniper-, mortar- and road-side-bomb-infested two-lane road may result in more casualties than anyone wants to imagine.

But the Democrats on Monday were so hell-bent on quick surrender and retreat that they never even mentioned casualties on the retreat. They should think about Napoleon's withdrawal from Moscow.

Most remarkably of all, not one of the candidates even mentioned the danger of Islamist terrorism the entire night. The Democratic candidates seemed pretty cocky on Monday. But they may have an Achilles heel: national security. Their manifest indifference to the nation's security may yet cost them public trust come next year's election.