The Senate: Chamber of Shame 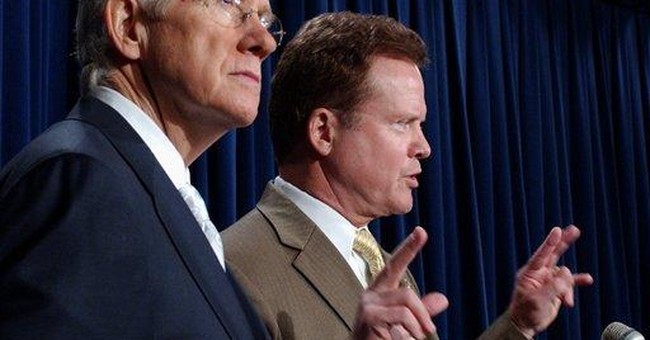 The Senate is emitting an embarrassing level of emotional policy twitching on the topic of Iraq. Sen. Harry Reid can't take the war anymore. He "knows" it is lost. Sen. Olympia Snowe has just about had it with the Iraqi government. If they don't meet her benchmarks -- that's it. Sen. Mitch McConnell thinks "that the handwriting is on the wall that we are going in a different direction in the fall, and I expect the president to lead it." Who authored that wall graffiti, he doesn't say. After talking with grieving family members of one of our fallen warriors, Sen. Pete Domenici "wants a new strategy for Iraq."

I haven't seen such uncritical thinking since I hid under my bedsheets to get away from the monsters back when I was 3 years old.

Whether they are talking about war weariness, grief over casualties, fear of their upcoming elections, disappointment with the current Iraqi government or general irritation with the incumbent president: What in the world do such misgivings of U.S. senators have to do with whether we should continue to advance our vital national security interests?

None of these senators have even addressed the question of whether the United States is safer if we leave Iraq than if we stay. Isn't that the key question? The question is not whether the Iraqi government deserves American sacrifice on their behalf. Our sons and daughters are not fighting, being grievously wounded and dying for Iraq -- but for American vital interests. If this were just about Iraqi democracy, I might join the screaming for a quick exit.

But if al Qaeda can plausibly claim they drove America out of Iraq (just as they drove the Soviet Union out of Afghanistan), they will gain literally millions of new adherents in their struggle to destroy America and the West. We will then pay in blood, treasure and future wars vastly more than we are paying today to manage and eventually win our struggle in Iraq.

Our staying power, unflinching persistence in the face of adversity, muscular capacity to impose order on chaos and eventual slaughtering of terrorists who are trying to drive us out will do more to win the "hearts and minds" of potentially radical Islamists around the world than all the little sermons about our belief in Islam as the religion of peace. As bin Laden once famously observed -- people follow the strong horse.

We have two choices: Use our vast resources to prove we are the strong horse or get ready to be taken to the glue factory.

Even Bush's war critics who specialize in Middle East affairs (such as the Brookings Institute) believe that the immediate chaos in the Middle East that will follow our premature departure would likely involve not only regional war there, a new base for al Qaeda, but also a nuclear arms race that would quickly result in the world's most unstable region -- which possesses the world's oil supply -- armed with nuclear weapons on a hair trigger.

But the debate today in Washington is about none of these strategic concerns. It is exclusively about Washington's political timetable and when the president will bend to such political necessity. For self-admitted politics -- rather than national security -- to be driving decision making in wartime Washington is not only an unpatriotic disgrace -- it is a national menace.

FDR: "Ike, you're going to have to get the Normandy Invasion completed by June this year."

Ike: "But I need at least another year to assemble troops and materiel, establish logistics and strategy and train the men for the battle."

FDR: "Sorry. Several senators are feeling very uncomfortable with the war. Frankly, they have just had it. And several of them are worried about their re-election."

Ike: "My men are fighting and dying for yards in Italy right now -- and even so, they can't wait to take the war to Hitler next year in France. Tell those pantywaisted senators to unloosen their girdles, take an aspirin and go to bed -- and leave the fighting to my men."

FDR: "But we could lose the Senate."

Ike:" Better to lose the Senate than the war."

FDR: "I'm with you, Ike. You beat Hitler, and let me beat the Senate."

But the worm will surely turn. And senators who today proudly call for retreat will then be hiding their faces in shame. And deservedly so. And the public will remember.