Terrorism and an Open Society 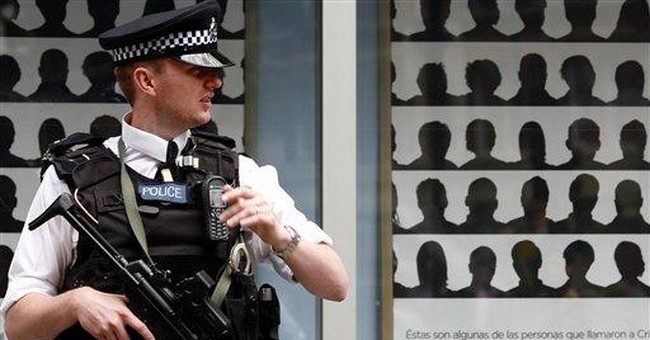 The world seems to be divided into people who see the silver lining in a darkly clouded sky, and those who are transfixed by the slightest bit of cloud in an otherwise azure sky.

Last week's terrorist events in England and Scotland have certainly brought out the silver lining spotters. Exemplifying such giddy optimists is the Washington Post's Anne Applebaum, writing from London. While not in the group of people (usually intense Bush-haters) who even deny the reality of the terrorist threat, nonetheless, Ms. Applebaum concluded her article with the proposition that this week's terrorists events are "an excellent reminder that we -- and our open societies, and our liberal values -- are still winning [the terrorist war on the west]."

She based her belief that we are "winning" on the response of the open British society and the levelheadedness of the British people: "the London bomb plot failed because open western societies are more resilient than we sometimes think they are That Britain has functional ambulance services and working traffic wardens (the people who reported the cars to the police) all of whom are civic minded enough to call the police when they suspect something is amiss, may not sound extraordinary. But these are precisely the kinds of institutions that are missing in many places, among them Baghdad "

Now, as a former Englishman, I certainly share Ms. Applebaum's admiration for the phlegmatic and sensible British disposition. And I also agree that Western democratic societies (particularly the English speaking ones) are deeply resilient. But I strongly reject her conclusion that we are currently winning; and, more importantly I am not yet convinced that our open, liberal democratic culture is necessarily an unalloyed competitive advantage in the struggle against culturally aggressive and violent radical Islam.

As to the first point about winning, I would remind Ms. Applebaum of the careful words Winston Churchill used to celebrate the return of 300,000 Allied troops from under the Nazis' guns and warplanes at Dunkirk in May and June 1940. He reminded a relieved British people not to confuse such a deliverance with a victory. Victories are not gained by moving backward -- even successfully backward (a point those calling for retreat from Iraq might want to keep in mind).

Success last week was merely the product of dumb luck: Failed terrorist detonators and plucky Englishmen spotting and reporting what they alertly saw.

Amazingly, a British "expert" on television even claimed that the fact that the terrorists were imported rather than home grown was further evidence that the British are winning the war. His far-fetched argument was that the terrorist apparently had to import foreigners because the British government had such a firm control on the local potential terrorists.

Yet I was personally told last year when I was in London by a very senior British counter-intelligence official that they judged there was a pool of more than 100,000 Muslims who might potentially be recruited to terrorism -- and that the British are hopelessly undermanned in their capacity to even monitor several hundred suspects simultaneously.

In a war, any war, it is always dangerous -- and sometimes fatal -- to over-estimate your side's strengths and the enemy's weaknesses.

It may well be that the great debate that we have not yet had (both in the United States and the West) is Ms. Applebaum's assertion that an open, liberal society is an asset in the struggle against radical Islam.

Of course, I devoutly hope that she is right. We all cherish the openness of our society. But what is the value of a once open, but eventually vanquished society? From Lincoln to Wilson to FDR, American presidents during existential wars have always curtailed civil liberties in the interest of effective war fighting.

There is undoubted wisdom in Ms. Applebaum's recognition that openness is -- all things equal -- a strengthening element in our society. It is certainly a pleasant element. But in the midst of a war with a relentless enemy, we must assess coldly and objectively which of our many "open" features benefit us, and which benefit the enemy.

As a first of such elements to assess, what do we think of the value of thousands of street cameras -- as the free and open British have inflicted on themselves? Is that intrusion into our privacy justified? And after that, what about national biometric identification cards for everyone?

It is a lamentable commentary on the times in which we live (or perhaps on my distorted vision) that I -- who entered politics from the libertarian wing of the Reagan Revolution -- on July 4, 2007 feel compelled to say yes to both the cameras and the cards.