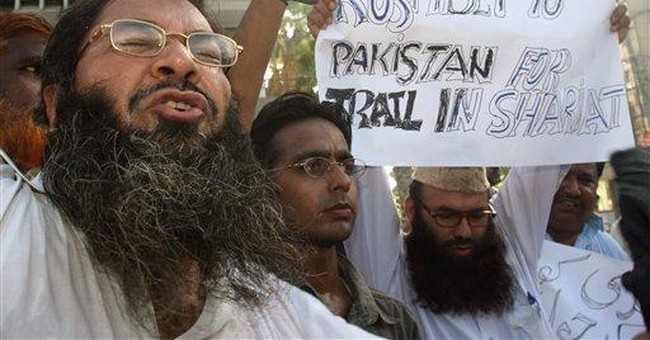 I have just finished reading a deeply disheartening book by my friend Professor Akbar Ahmed. Dr. Ahmed is the former Pakistani high commissioner to Britain and member of the faculties of Harvard, Princeton and Cambridge, current chair of Islamic Studies at American University -- and is in the front ranks of what we Westerners call the moderate Muslims, who we are counting on to win the hearts and minds of the others.

I first met Professor Ahmed shortly after Sept. 11. He, his friends and I broke bread several times and discussed the condition of Islam and the West. He graciously agreed to share a stage with me at the National Press Club to debate with me the merits of my book, "The West's Last Chance: Will We Win the Clash of Civilization?" As my book was very harshly received by many Muslims around the world, I don't doubt that Dr. Ahmed shared that stage with me at some risk at least to his reputation -- if not more.

We even considered doing a weekly cable TV show on the clash of civilization from our different (but respectful) points of view -- although nothing came of it. Dr. Ahmed is a worldly man of letters who profoundly believes that collective good can be accomplished by individual acts of good conscience -- that each of us (Muslim, Christian, Jew, Hindu) must connect with others and live out our convictions for our common humanity in the face of tribalism, religion and other dividing forces. Thus, his reach out to me, a fiery American nationalist TV commentator and editor to find if not complete common ground, at least common friendship.

His new book, "Journey into Islam: The Crisis of Globalization," is thus particularly heartbreaking for me. As a trained anthropologist, he took three of his students on a six-month journey around the Muslim world to investigate what Muslims are thinking.

His conclusion: Due to both misjudgments by the United States and regrettable developments in Muslim attitudes, "The poisons are spreading so rapidly that without immediate remedial action, no antidote may ever be found." And Dr. Ahmed has always been an optimist.

He divides Muslim attitudes into three categories named after Indian Muslim cities that have historically championed them: Ajmer, Aligarh and Deoband.

In short, Dr. Ahmed is an Aligarth. As a young man he was one of new Pakistan's best and brightest, led by Pakistan's founding father and first president, Dr. Jinnah. They hoped to build a modern democracy, overcome tribalism and the more obscurantist aspects of Islam while still being "good Muslims." The Deobands are the Bin Ladens and all the other Muslims we fear today.

Even one or two years ago, I think Dr. Ahmed was reasonably hopeful that his views had a fighting chance around the Islamic world. So, my jaw dropped when I got to page 192 of his new book and he described his thoughts while in Pakistan last year on his investigative journey: "The progressive and active Aligarth model had become enfeebled and in danger of being overtaken by the Deoband model I felt like a warrior in the midst of the fray who knew the odds were against him but never quite realized that his side had already lost the war."

He likewise reported from Indonesia -- invariably characterized as practicing a more moderate form of Islam. There, too, his report was crushingly negative. Meeting with people from presidents to cab drivers, from elite professors to students from modest schools (Dr. Ahmed holds a respected place in the Muslim firmament around the globe), reports that 50 percent want Shariah law, support the Bali terrorist bombing, oppose women in politics, support stoning adulterers to death. Indonesia's secular legal system and tolerant pluralist society is being "infiltrated by Deoband thinking Dwindling moderates and growing extremists are a dangerous challenging development."

Although I dissent from several of Dr. Ahmed's characterizations of the Bush Administration, Washington policymakers and journalists should read this book because it delivers a terrible message of warning both to those who say things aren't as bad as Bush says, and we can rely on the moderate voices of Islam -- with a little assist from the West -- winning; and for those who argue for aggressive American action to show our strength to the Muslims (because, in Bin Laden's words, they follow the strong horse).

To the first group he says that the "moderate" voice is in near hopeless retreat across the Muslim world. Don't count on them. To the second group he says, whatever Bush's intentions, our aggression only strengthens our enemies.

I think he knows his solution is forlorn: "Although the planet's societies are running against time [we must] transcend race, tribe and religion and cherish our common humanity, every individual must become the message." Let us pray.

But for those of us who don't expect the milk of human kindness to suddenly start flowing, it behooves us to read Professor Ahmed's honest assessment of the real state of Muslim world attitudes and coldly re-assess our various policy prescriptions in its light.

These are grim times, but we must resist indulging ourselves in hopeful fantasies. Every piece of our national security calculations must be realistically assessed against the available facts. What is working, what isn't, what to do?